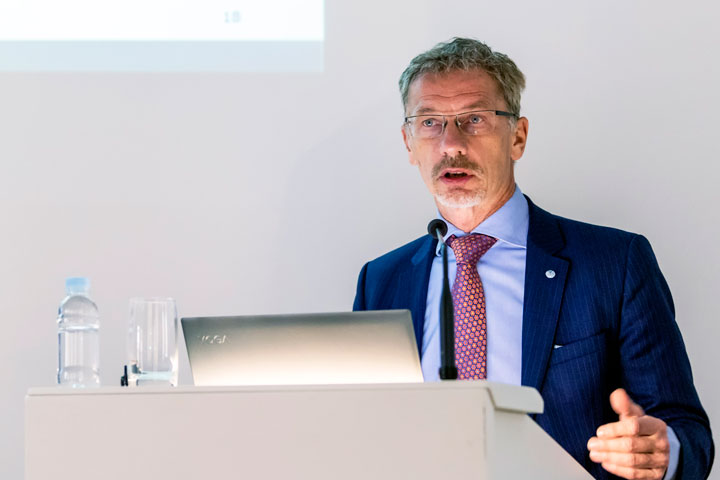 Low fertility rates and a rise in life expectancy will result in a population fall and a significant increase in the share of elderly population. Croatia is witnessing a permanent population decline and under some projections, by 2050 the country's population will total only 3.6 million, or possibly even only 3.2 million, according to professor Anđelko Akrap, said Boris Vujčić, Croatian National Bank Governor at a scientific gathering entitled "Reproductive Health, Family Planning and Demographic Policy" held on 23 November 2018 in the Croatian Academy of Sciences and Arts (HAZU).

Croatia is facing serious demographic challenges which have become more grave with population outflows in the past few years. Croatia's citizens are also getting older; life expectancy today is approximately 79 years and is expected to rise to 87 years by 2070, stressed Governor Vujčić. Ageing population puts great pressure on public finances; the government will have to balance between financial and social sustainability of the social security system and the 2018 pension reform will probably represent an increase in future pension expenditures over current estimates.

Changes in the pension system will alleviate the problem of low and falling replacement rates of future retirees, the Governor said, stressing that the increase in the retirement age and possible recruitment of foreign labour would probably not be sufficient to halt the unfavourable effect of demographic changes on economic activity and that immigration would not be able to solve the problem of negative demographic developments in Croatia. Therefore, for higher levels of income it will be necessary to change the structure of the economy in line with technology and innovation, the areas in which Croatia lags behind. Croatia ranks as one of the countries with the smallest investment in research and development and poorest innovation system, he added.

Turning to challenges of economic growth in the conditions of technological changes, the Governor said that the recession arising from the financial sector had resulted in a decline in long-term growth forecasts. The USA recorded high growth rates, in contrast with much slower recovery in the European Union. There is also a change in the structure of capital and the role of computers and software in production is growing. The advantages of new technologies include a significant increase in productivity, possibility for global allocation of resources, improved quality of life and longer life expectancy. Technological change underpinned the rise in living standards and technology is increasingly becoming widely used. Globally, China is becoming one of the key investors in research and development, said the Governor, noting China's global lead position in terms of the number of patents, with the country ranking second, immediately after the USA.

Labour automation reduces the demand for some occupations that leads to rising inequality on company and employee levels. While large companies may adopt new technologies, employees' wages do not rise in line with increased productivity. Technological development has not affected income of all groups equally, and automation might lead to changes in the labour market. The development of technology may alleviate considerably future economic problems arising from demographic developments and will bring about considerable changes in the labour market but the effect will not be the same in all countries. The society has to prepare for that and offer solutions in education by investing in skills that cannot be developed by robots and the adjustment to new technologies has to start now, concluded the Governor.

At the gathering, opened by Mirna Šitum, a fellow of the Croatian Academy of Sciences and Arts, some ten presentations were held, in addition to that held by Governor Vujčić, on the topic of population policy and promotion of reproductive health. It was stressed that the decline in the number of births in our country that had been present for many years now had caused a fall in the number of young persons and that we were becoming a nation of an ever-older population. The organisation of this scientific gathering aimed at encouraging discussion in a wider scientific community about current demographic challenges in Croatia.