Published: 1/2/2015 Modified: 11/11/2020
With the accession of the Republic of Croatia to the European Union, the Croatian National Bank has become an integral part of the European System of Central Banks (ESCB). In the same way as other central banks in the European Union, the CNB carries out activities necessary for the implementation of the tasks of the ESCB. The Governor of the CNB is a member of the General Council of the European Central Bank (ECB) and CNB experts participate in the work of the committees, subcommittees and working groups of the ESCB.

The Eurosystem comprises the ECB and the national central banks of the 19 EU Member States that have adopted the euro.

The primary objective of the ESCB is to maintain price stability. Without prejudice to that objective, the ESCB supports the general economic policies in the European Union in order to contribute to the achievement of its objectives.

Within the ESCB and the Eurosystem, the central banks perform their tasks and carry on their activities in accordance with the provisions laid down in the Treaty on the Functioning of the European Union and the Statute of the ESCB and the ECB. Unlike the central banks which make up the Eurosystem and conduct a common monetary policy, the central banks of the Member States which have not adopted the euro, such as the CNB, retain responsibility for formulating and implementing monetary and foreign exchange policies and for implementing other tasks assigned to them pursuant to national legislation.

The ESCB and the Eurosystem are governed by decision-making bodies of the European Central Bank: the Governing Council, the Executive Board and the General Council.

The European Central Bank represents the core of the ESCB and the Eurosystem. It was established on 1 June 1998 and is one of the institutions of the European Union. The ECB is independent in exercising its powers and enjoys legal personality under public international law. It is headquartered in Frankfurt am Main, Germany. The ECB and national central banks jointly carry out the tasks entrusted to them within the ESCB.

The ECB has three decision-making bodies which also govern the ESCB and the Eurosystem. They are the Governing Council, the Executive Board and the General Council.

The Governing Council of the ECB is the main decision-making body of the ECB. It formulates the monetary policy of the euro area and adopts the guidelines and takes the decisions necessary to ensure the performance of the tasks entrusted to the ECB and the Eurosystem. It consists of six Executive Board members and the governors of the central banks of 19 EU Member States that have adopted the euro.

The Executive Board of the ECB is an operational body of the ECB and the Eurosystem which implements the monetary policy of the euro area in accordance with the decisions of the Governing Council and manages day-to-day business of the ECB. It consists of the ECB's President, Vice-President and four other members.

The General Council of the ECB has been established as the third decision-making body of the ECB. It is a transitional body and will continue to exist until all EU Member States adopt the euro, at which point it will be dissolved. It is composed of the President and the Vice-President of the ECB and the governors of all 27 EU national central banks, including the Governor of the CNB.

The Supervisory Board of the ECB was established after the ECB was conferred with specific tasks regarding prudential supervision of credit institutions within the Single Supervisory Mechanism (SSM), with the aim of contributing to the soundness of the banking system and the stability of the financial system. The Supervisory Board consists of a Chair, a Vice-Chair, four ECB representatives and representatives of national supervisors from euro area countries and other Member States which decide to participate in the SSM. Following the establishment of close cooperation between the CNB and the ECB, Croatia participates in the SSM as of 1 October 2020, whereas the CNB Vicegovernor in charge of supervision participates in the work of the Supervisory Board with full voting rights.

In the execution of their tasks, the decision-making bodies are supported by committees, subcommittees and working groups of the ESCB/Eurosystem, whose members are experts from national central banks and the ECB. Each of the Committees and its substructures is specialised for a certain activity of the ESCB. Their task is to provide expertise to the Governing Council and the General Council and thereby facilitate the decision-making process. 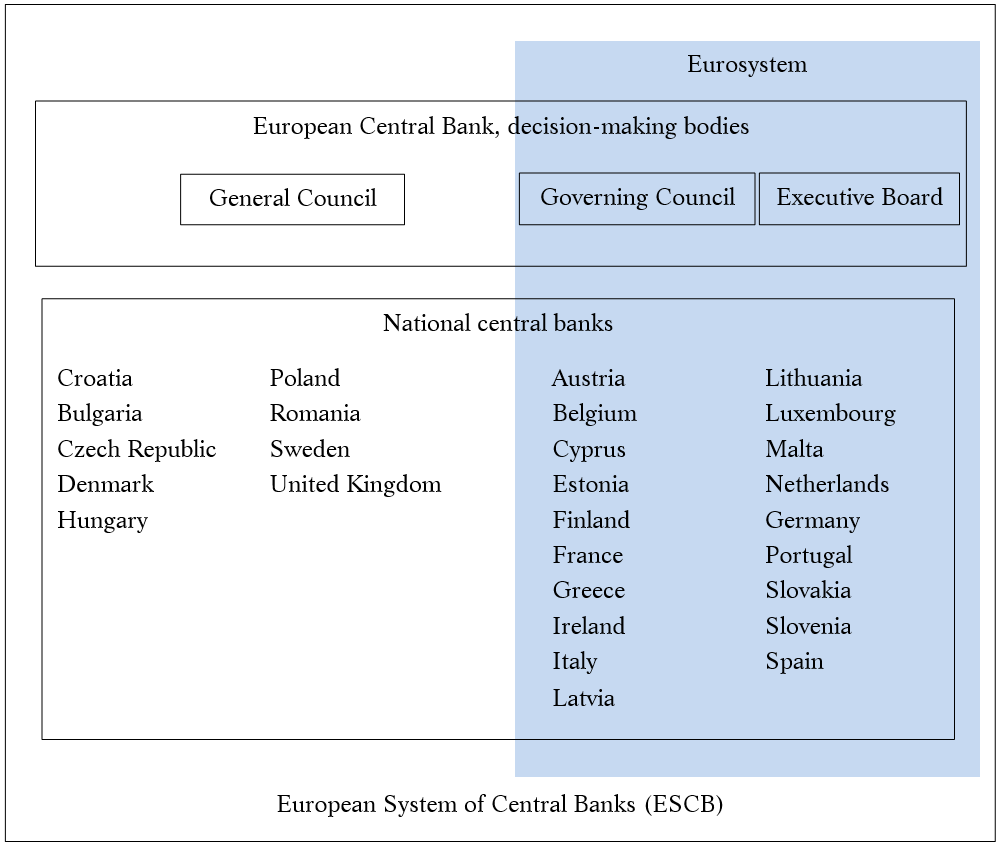