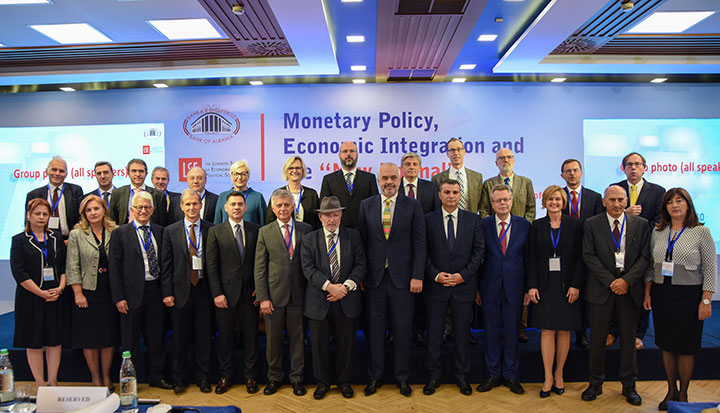 "In small and open economies, the normalisation of monetary policy may result in a possible reversal of capital flows back to advanced economies, which might increase vulnerabilities of leveraged countries," Sandra Švaljek, Deputy Governor of the Croatian National Bank, said at the conference organised by the Bank of Albania in cooperation with the London School of Economics and Political Science (LSE) on the topic of "Monetary Policy, Economic Integration and the 'New Normal'", held in Tirana on 1 November.

The CNB Deputy Governor participated in the conference's closing panel discussion on the topic of "What are the main challenges for small economies in this 'new normal'?".

In speaking about the potential risks and challenges small and open economies – such as the Croatian economy – face as a result of monetary policy normalisation, the CNB Deputy Governor emphasised that yield decompression due to monetary tightening may lead to the deterioration of financial conditions in the emerging markets. One of the effects may also include strains on non-financial corporates that have borrowed heavily in foreign currencies due to dollar appreciation and increased volatility in foreign exchange markets, Ms Švaljek added.

During the panel discussion, the Deputy Governor stressed that we are faced with uncertainties because it is unknown whether monetary policy will normalise, or when this will happen and to which extent. In addition, the effects of normalisation will certainly vary from country to country and may range from neutral to very unfavourable. As a result, there is no single response to monetary policy normalisation.

In the discussion, the Deputy Governor expressed her personal view that the best response to the reversal of policy is the strengthening of the macroeconomic fundamentals and policy frameworks. The experience with "taper tantrum" suggests that countries with sound macroeconomic fundamentals have smaller market reactions to monetary policy spillovers from advanced economies. According to the Deputy Governor, it is advisable for countries to boost their resilience through the implementation of structural reforms to promote strong, sustainable and balanced growth and to implement a vigilant macroprudential policy as the first line of defence, especially for countries with high foreign currency debt.

During the panel discussion on the topic of "What are the main challenges for small economies in the 'new normal'?" Deputy Governor Sandra Švaljek said that the European Central Bank's phasing out of unconventional monetary policy would be a welcome change, among others, in the institutional framework within the European Union, in order to create space for a monetary policy response in the case of a possible recession, and the need to strengthen the financial architecture of the euro area, in particular with regard to the prevention of money laundering. In conclusion, the Deputy Governor announced that Croatia intends to become a member of the euro area.