Structural changes in the labour market have begun 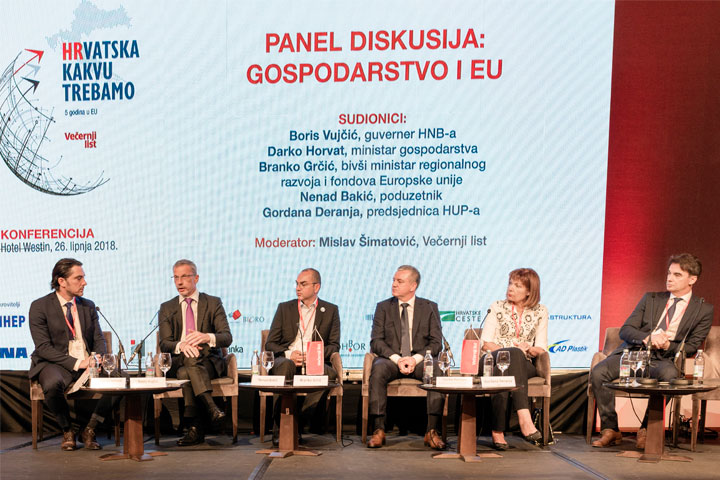 "Croatia's accession to the European Union provided an impetus to the country's exports growth, the first driver of economic recovery, which is growing by approximately 2.7%. Although standing at half its growth rate in the period before the crisis, it is a sustainable growth as it takes place amid deleveraging by all the sectors – households, the corporate sector and the government", said Boris Vujčić, Croatian National Bank Governor at the conference "The Kind of Croatia We Need – 5 Years of EU Membership", an event held on 26 June and hosted by Večernji list.

Governor Vujčić commented on Croatia's faster growth in the last decade, explaining that such growth was unsustainable since it was based on debt accumulation; borrowing of the government, the banks and the household sector and that it could only function up to a point when the debt reached a certain level after which it could not grow anymore, after which a crisis commonly hits. Excessive borrowing was the main reason behind a lengthy period of recession in Croatia, the Governor added, noting the importance of implementation of structural reforms, which could be more beneficial to Croatia than the mere accession to the European Union and European Monetary Union, which definitely bring their benefits as well.

Turning to investments, the Governor explained that although money was the cheapest now, investments were missing because the banks would not extend loans to companies failing to show credible signs that the loans would be repaid. In addition, there is no market perspective for those wishing to invest, and structural changes that would improve market conditions are also lacking, and there are many obstacles to foreign investments. With its accession to the European Union, Croatia has entered a vast number of programmes creating opportunities for the high-tech industry it would not have had had it not been for Croatia's membership in the EU, the Governor said, giving an example of the fusion research project, with Croatia and Spain as partner countries.

As regards the priorities from the standpoint of monetary authority, the Governor said that the central bank would continue to maintain exchange rate and banking system stability and noted that he expected that Croatia's journey towards the euro area would be a rather fast one. Commenting on the labour market, he observed that it would be the most dynamic sector in the following five to ten years. "Structural changes on the labour market have begun, and they will be very deep and require increasing adjustment efforts", the Governor said, noting the issue of demographic ageing and labour outflows which lead to pressures on wage growth. "Over a medium and long term, the fast pace of advancement in automatisation and robotisation will make it possible to eliminate the problem of labour shortage and instead, we will probably start talking about the problem of an ever increasing number of jobs being replaced by automated or robotised jobs", governor Vujčić noted in conclusion.

The panel discussion on the topic "The Economy and the EU" gathered, in addition to Governor Boris Vujčić, Darko Horvat, Economy Minister, Branko Grčić, former Minister of Regional Development and EU Funds, Nenad Bakić, entrepreneur and Gordana Deranja, the President of the Croatian Employers' Association.

Emil Tedeschi, entrepreneur, Gordan Jandroković, the Speaker of the Croatian Parliament and Kolinda Grabar-Kitarović, President of the Republic of Croatia gave topical presentations, which were followed by three panel discussions. In addition to the panel entitled "The Economy and the EU" with participation of Governor Boris Vujčić, the other two panel discussions were "The Politics and the EU" and "Positive Experiences from EU Membership".