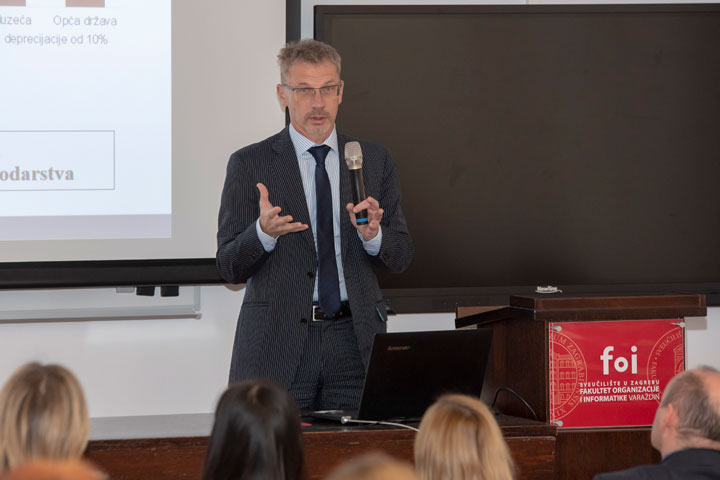 "Croatia is the smallest of the EU Member States that still use their own currency, while its economy is highly euroised: as much as 75% of domestic savings and 67% of total debt liabilities is linked to the euro," said the Croatian National Bank Governor, Boris Vujčić, in a lecture on Eurostrategy delivered at the Varaždin Faculty of Organization and Informatics.

"The specific characteristics of the Croatian economy are conducive to the introduction of the euro," stated the Governor, adding that Croatia's trade is closely integrated in the euro area, which is reflected in a high synchronisation of the business cycles. "Furthermore," the Governor went on to say, "the Croatian banking system is dominated by banks owned by euro area institutions, which constrains the room for monetary and foreign exchange policies due to a high degree of euroisation and the presence of the euro in the Croatian financial system."

Governor Vujčić presented the benefits and costs of the introduction of the euro, emphasising that its considerable and permanent benefits will far exceed the costs. The entry to the euro zone will eliminate currency risk, a major source of vulnerability of the Croatian economy. Additional benefits include interest rate reduction, the elimination of currency crisis risk and the lowering of transaction costs. The adoption of the European currency will further boost international trade and investments. It will have an especially positive effect on tourism because 70% of total tourism revenues and 60% of total tourist nights originate from the euro area. The introduction of the euro will enable Croatia to access financial assistance mechanisms and participate in the distribution of the Eurosystem's monetary income.

Efficient measures against the upward rounding of prices

The benefits of joining the euro zone are permanent, whereas the costs are small and mostly one-off. Despite the widespread perception among the general public that the adoption of the euro will trigger price increases, the risk of the conversion resulting in price growth is, as a rule, very small and one-off. Specifically, the impact of the conversion on the prices of new euro area Member States was on average 0.23 percentage points, while its impact on Croatia's CPI is estimated at 0.2 percentage points. The increase in the prices of services and a small number of frequently purchased products is more pronounced, while the impact on the consumer basket of the lower income population is smaller. According to the Governor, the Government intends to implement efficient measures against the unwarranted upward rounding of prices: six months before and after the introduction of the euro prices will be expressed both in kuna and in euro.

"The introduction of the common currency is the obligation of all new Member States," said the Governor, adding that the entry to the European Exchange Rate Mechanism (ERM II) is a key step in the process of euro adoption. There are no clearly defined criteria for the entry to the ERM II, but there are the Maastricht criteria, which Croatia will fulfil in 2018 for the third successive year. Croatia is also expected to enter the banking union on the day it enters the ERM II. The banking union is a new project, consisting of three segments: the single supervisory mechanism for systemically important banks, the single resolution mechanism and the common deposit insurance scheme.

Referring to the state of public finances, Governer Vujčić stated that in 2017 Croatia had exited the Excessive Deficit Procedure. "Croatia's public debt has been trending downwards, although its level continues to be the highest among the peer countries. Macroeconomic imbalances are shrinking, but they still exist. The achieved real convergence level is sufficient for the accession to the ERM II, but potential growth is low, which is associated with low productivity growth," said the Governor.

The Governor concluded by stating the following: "Economic policy priorities during the process of euro adoption include the continuation of a prudent fiscal policy aimed at balancing the budget, reducing public debt and creating fiscal space for crisis periods. Structural reforms to increase potential growth should also be implemented, including the reduction of macroeconomic imbalances, the achievement of a sustainable economic growth and the creation of new jobs. These structural reforms also have other important implications, in addition to for entering the ERM II."