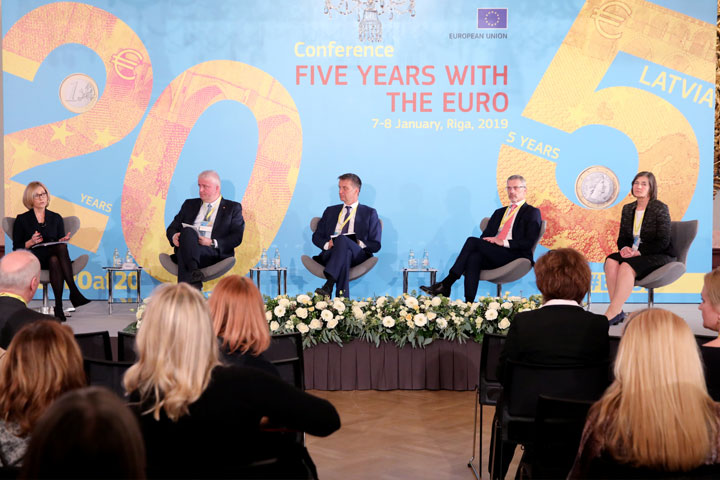 The adoption of the euro is our strategic goal and the sooner it is achieved, the better. It is much more difficult to enter the euro area today than it was fifteen years ago, mostly because the requirements for the first step, that is, joining the ERM II, are much more demanding. Nevertheless, we will persevere to meet all the criteria and I believe that we will succeed thanks to attained high-quality macroeconomic indicators, the support of our European partners and the support of Croatian citizens, which exceeded fifty percent in late 2018, noted Boris Vujčić, the Croatian National Bank Governor at the conference Five Years with the Euro, organised by the European Commission in Riga on 7 and 8 January 2019. The conference is attended by high-level representatives of the Commission, monetary and financial policy makers from EU countries, representatives of the Latvian financial and academic community and civil society representatives.

In his opening address, Māris Kučinskis, the Prime Minister of Latvia, stated that the Latvian adoption of the euro was a good move, both from the strategic and economic point of view, but he warned that the euro adoption itself could not solve a country's structural difficulties. The only right way for that to happen is to implement structural reforms, enhance the economy's competitiveness and be patient. There are no quick solutions that would disregard economic principles, including the solutions advocated by populists.

Addressing the conference participants on behalf of the organiser, Valdis Dombrovskis, Vice-President of the European Commission responsible for the euro, social dialogue and financial stability, noted that the Latvian experience may be useful to countries wishing to adopt the euro, such as Bulgaria and Croatia, which have already stated their intention to join the euro area. With regard to the requirements for euro area membership, he noted that every time has its own challenges: five years ago, when Latvia was in the process of euro adoption, domestic public had to be convinced of the advantages of joining the euro area, which was undergoing a crisis at the time, and then the euro area itself had to be convinced that it should continue to spread. The banking union has been established as a response to the successfully weathered crisis while regulations and supervision of the financial system have been tightened. This has posed new challenges to candidate countries for participating in the ERM II and the monetary union. However, Dombrovskis pointed out that all candidates are treated equally in the accession process, and expressed his expectation that Croatia would be the next country to apply for ERM II entry.

It is certainly more difficult to adopt the euro today than it was when Latvia adopted it, just as it was much easier in the past to join the EU than it is today. The first group of countries that joined the EU in 2004, soon thereafter joined the ERM II as well. Whoever wanted to enter the ERM II was welcome to do so without requirements, as such was the political environment at the time. This changed after the global financial crisis, and today there are some requirements for ERM II entry. We are well aware of that and stand ready to take the necessary steps in that direction, noted Governor Vujčić.

As regards the requirements for joining the euro area, the most difficult part is to enter the ERM II, because of the lack of clear criteria a country should meet to participate in the exchange rate mechanism. Once a country is part of the ERM II, the criteria for euro adoption are clear, though some of them are a moving target and a bit of luck is sometimes also needed to meet them, Governor Vujčić added. Regarding changes of the euro area itself, to which Croatia needs to adjust, we already have experience with such situations. It should be noted that Croatia became an EU member in 2013, and we are all aware how much new EU legislation was being created at that time. We had to catch up with all that emerging legislation in real time, which was quite a challenge for a new member state. We successfully met that challenge, and we shall also meet all requirements for euro area membership.

Regarding public support for euro adoption in Croatia, results of the recent Croatian National Bank survey show that 51% are in favour, 37% are against and the remaining 12% are undecided. It is interesting that the youngest and the oldest population groups as well as the higher educated are most in favour of euro adoption. These results should also be interpreted in light of the fact that so far there has been no real information campaign on the euro in Croatia, Governor Vujčić explained.

As regards expectations in this area, I believe that the major challenge will be to explain the effects of the euro on prices, i.e. living standard, and to dispel the widespread stories that prices in countries that adopted the euro rose significantly afterwards. On the other hand, it will be easier to explain positive economic effects of euro adoption: disappearance of a significant exchange rate risk arising from a high degree of euroisation, convergence of interest rates closer to those in core euro area countries, a positive impact on foreign trade, foreign investment and employment. All this will in turn give a boost to both the economy and standard of living, Governor Vujčić pointed out.

In our efforts to adopt the euro, we feel the support of our European partners; such support is the outcome of Croatia's favourable macroeconomic indicators, but also the strength and resilience of our banking system, noted the Governor. The current account deficit has turned into a surplus, external debt has declined sharply, from 110% to 76% of GDP, fiscal deficits have been balanced, and the budget even ran a surplus last year, so that the public debt level has been falling at a speed three times faster than required by the Stability and Growth Pact. All these macroeconomic achievements are best confirmed by the fact that Croatia today meets 11 out of 14 scoreboard indicators monitored under the Macroeconomic Imbalances Procedure, with the remaining three indicators also showing positive trends. For the sake of comparison, five years ago, Croatia did not meet seven of these criteria. Furthermore, the banking system has been robust, as best illustrated by the two facts: the government did not have to spend a single cent for banks' recapitalisation during and after the financial crisis, whereas the system-wide capital adequacy remains at a high 17-18% even in a hypothetical case of a full write-off of all NPLs.

Interestingly, conference participants stated that citizens' support for the euro grew in all the Baltic countries following their entry to the euro area. For example, public support for the euro was 34% at the time when Latvia joined the ERM II, while it is around 70% five years after euro adoption.