Prospective structural reforms in the path towards the euro 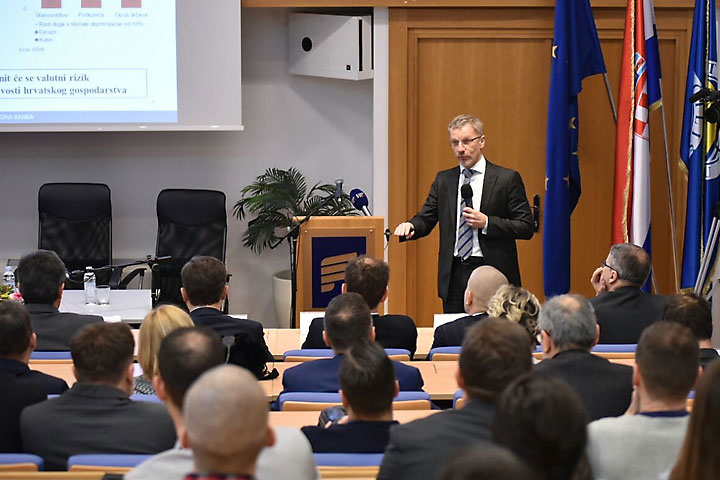 Economic and structural policies are a precondition for the adoption of the euro in Croatia, but, irrespective of this goal, they are also necessary, said the Croatian National Bank Governor, Boris Vujčić, in his speech delivered today before the academic and business community at the Round Table "Challenges of the Adoption of the Euro in Croatia", organised by the Faculty of Economics in Rijeka.

The priorities of economic policy in the process of euro adoption include the sound and responsible implementation of fiscal policy with the aim of balancing the budget, reducing public debt and creating fiscal space for the crisis period (countercyclical action), the Governor said, emphasising the need for the implementation of structural reforms with a view to increasing potential growth: reducing macroeconomic imbalances, achieving sustainable economic growth and creating new jobs. Structural reforms are key for effectively reducing tax and administrative burden of the economy, judicial reform, increasing the efficiency of the public sector, reform of the education system, better state property management, increasing the sustainability of the pension and health care systems and a further increase in the use of EU funds.

Governor Vujčić presented the Euro Strategy, jointly prepared by the CNB and the Government of the Republic of Croatia, as the starting point for the process of euro adoption in Croatia. The Governor emphasised that specific characteristics of the domestic economy speak in favour of the adoption of the euro because Croatia is the smallest member state still using its own currency, which is firmly integrated in the euro area in terms of trade, and its business cycle largely mimics developments in the euro area. Croatia’s economy is highly euroised (75% of domestic savings and 67% of total debt are indexed to the euro) and banks in the ownership of institutions from the euro area are predominant in the Croatian banking system, which restricts monetary policy options.

The costs of euro adoption in Croatia are mostly one-off and low, while the benefits of the introduction of the euro are permanent and relatively high, Governor Vujčić added. The adoption of the euro eliminates currency risk for the citizens, corporations and the government, which will in turn reduce the risks to financial and macroeconomic stability. It will favourably affect the country's risk premium, while regulatory costs for banks will substantially reduce, having a positive effect on interest rate levels, as well as on financing conditions, thus accelerating economic growth. In addition, citizens and corporations will save on currency conversion transactions and charges for cross-border payments in euro. Exports and investments are expected to be positively affected, transaction costs will be lowered and greater price comparability will spur international trade and tourism.

Participation in the Exchange Rate Mechanism (ERM II) is the crucial step in the process of euro adoption. In order to gain support, it is necessary to show that Croatia is a good candidate for the adoption of the euro, i.e. through solid macroeconomic fundamentals (elimination of excessive macroeconomic imbalances), pursuing a responsible economic policy, the sufficient level of real convergence and the quality of institutions, the Governor said, and noted that the presence of excessive macroeconomic imbalances in a country that intends to introduce the euro may slow down its progress towards the monetary union.

The improvement of macroeconomic and fiscal indicators, as well as the sufficient level of real convergence, speak in favour of our readiness to initiate talks with EU institutions about launching the process of euro adoption, but the main challenge will be to gain support of EU member states and institutions for the participation in the ERM II, which largely depends on their will to further expand the euro area, Governor Vujčić said.

In addition to Governor Vujčić, the panelists included Jasmin Bajić (President and CEO, Croatia Airlines), Branko Baričević, MSc (representative of the European Commission Representation in the Republic of Croatia), Ivan Perković (General Manager at RALU Logistika), Christoph Schoefboeck, PhD (President of the Management Board of Erste & Steiermärkische Bank), Dario Silić, PhD (CEO, BINA-Istra), David Sopta (President of the Management Board of Jadrolinija) and Prof. Saša Žiković, PhD (Vice Dean for Science at the Faculty of Economics, Rijeka). The topics of discussion included: open issues, the advantages and disadvantages of euro adoption, and the challenges for which we have to prepare in the forthcoming period. The panelists largely supported the adoption of the euro, in the anticipation of positive effects for public and private sector business operations.