Financial education – an efficient measure against indebtedness in the long term 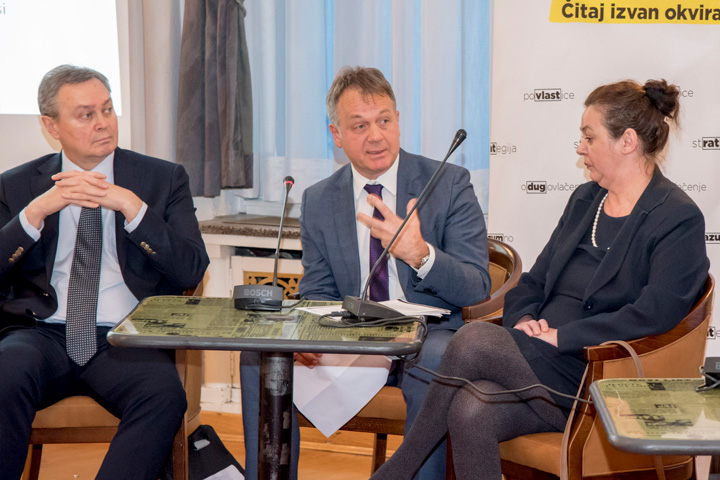 The Croatian National Bank Vicegovernor, Bojan Fras, spoke at the conference on the topic of the "Frozen Accounts of Citizens: from Facts to Potential Solutions", held in Zagreb on 27 November 2017 and organised by Styria Croatia and the Express weekly magazine. Vicegovernor Fras said that only 7 per cent of housing loans to households were not repaid regularly, despite their significant share in non-performing loans (NPLs). In addition to housing loans, general-purpose cash loans and overdraft facilities account for a significant share in NPLs in the household sector. The CNB has the task to ensure the stability of credit institutions, which implies the stability of the financial system, and make sure that NPL risk and treatment at banks is kept within legal limits.

In addition to Croatia, other EU member states and Croatia's neighbouring countries also face the problem of overindebtedness. For this reason, the European Union has adopted a number of regulatory initiatives whose application should result in reducing the number of frozen accounts of its citizens. In line with the implementation of European solutions, the new Consumer Mortgage Credit Act was recently adopted in Croatia, introducing a number of novelties. The Act includes measures, among other things, in compliance of which credit institutions must assess the creditworthiness of consumers, provide clients with detailed information about all risks, conditions and costs associated with the loan, unconditionally and at the client's request convert a foreign currency loan into kuna. The possibility of contracting a walk away clause has also been introduced, allowing that the transfer of ownership of the property (as a security instrument) to a credit institution is deemed as if all of the remaining obligations arising from the loan agreement are fully met.

Vicegovernor Fras emphasised the importance of financial education among the instruments aimed at reducing the number of frozen bank accounts and foreclosures in the long term. The Vicegovernor mentioned the survey "Measuring financial literacy", which the Croatian Financial Supervisory Agency (HANFA) and the CNB had carried out in Croatia. The final internationally comparable results of the survey showed that young people younger than 19 and people over 70 have the lowest level of financial literacy. For this reason, the CNB has been implementing educational models for the younger population. Last year, almost 2,000 secondary school and university students attended workshops and lectures organised at the CNB.

In addition to Vicegovernor Bojan Fras, participants in the panel discussion addressing the problem of blocked citizens whose bank accounts have been frozen included Igor Vidra, Head of Sector for Civil and Commercial Law Regulations, Ministry of Justice, Orsat Miljenić, former Minister of Justice, currently Social Democratic Party (SDP) MP, Zorka Čačić Zagrajski, Judge of the Municipal Court of Zagreb, Mirka Jozić, Head of the Zagreb City Office for Economy, Zdenko Adrović, Director at the Croatian Banking Association and Sarajko Baksa, representative of the Association of the Blocked.

The discussion was opened with the analysis "Ovršeni dug (blokade) građana" (Citizens' foreclosed debt [blockages]) by Velimir Šonje, Director of Arhivanalitika. Data have revealed that in the period from mid-2014 to mid-2017, the number of citizens whose bank accounts were frozen did not increase significantly. However, in the past three years their debt increased by HRK 14 billion and totalled HRK 42 billion. The analysis has also shown that 63 per cent of total debt is held by 10,000 people. The number of those whose accounts have been frozen for less than a year is decreasing, and their number has almost halved. Although banks hold the bulk of the debt, it is still declining, also because a part of the debt has been sold to factoring agencies, among other reasons. However, according to the criterion of the number of blocked citizens, banks are ranked only third, after the ICT sector (telecoms and HRT) and the central government (Tax Administration, towns and municipalities), whose share in the number of citizens whose bank accounts have been frozen has increased significantly over the past years.