European Union funding to be aimed at projects boosting growth 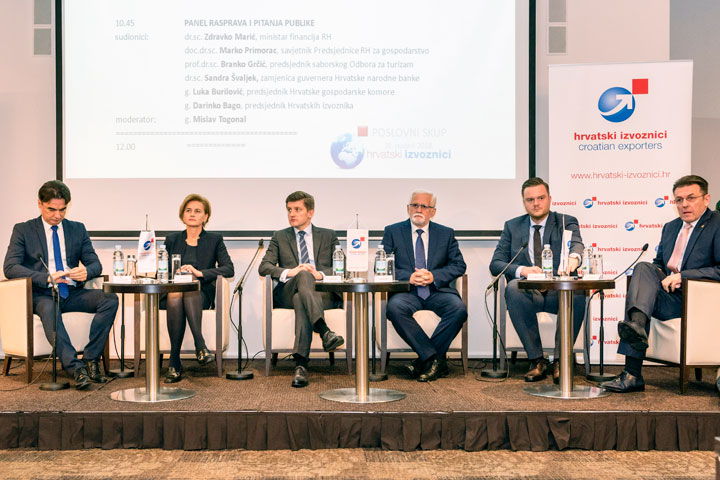 The kuna has been stable for a long succession of years, and it is exactly the stability of the exchange rate that has a favourable impact on exports, noted Croatian National Bank Deputy Governor Sandra Švaljek at the gathering "Economic Policy of the Republic of Croatia and the Expectations for 2019", hosted by the Croatian Exporters Association, on 20 November in Zagreb.

Croatia witnessed, alongside Slovenia, the smallest appreciation of the real effective exchange rate in the pre-crisis period of all the countries of Central and Eastern Europe, Deputy Governer said, noting the efforts of the Croatian National Bank over the past years to prevent excessive strengthening of the kuna. Croatia is yet to join the European Exchange Rate Mechanism and introduce the euro over a medium term which will bring many benefits not only to the exporters but also to all other entrepreneurs, the Deputy Governor said, underlining that the benefits of the introduction of the euro largely outweigh itse costs.

Turning to economic growth, the Deputy Governor said that the potential growth rate in Croatia was below 2%, insufficient to catch up with the countries of the Central and Eastern Europe, and that investment promotion was crucial if we were to accelerate economic growth. Unproductive public expenditures account for a large share of public expenditure in our country. They do not spur growth, cautioned Deputy Governor Švaljek, stressing that emphasis should be placed on productive public expenditures such as expenditures for education, health and capital investments. Also, the EU funds available should be aimed at projects that will ensure higher growth rates over a longer term.

Responding to the question of a possible 10% depreciation of the kuna, the Deputy Governor explained that it would have a negative effect on the corporate sector the debt of which is predominantly in a foreign exchange.

In introductory remarks, the Minister of Finance Zdravko Marić noted that positive economic developments were expected to continue over a medium term and that the real gross domestic product would grow by 2.9% in 2019. Economic growth throughout the entire 2018 to 2021 period will be fuelled by domestic demand, while employment is expected to rise and inflation is expected to hold steady at low levels.