Adoption of the Euro: Impetus to exports and employment 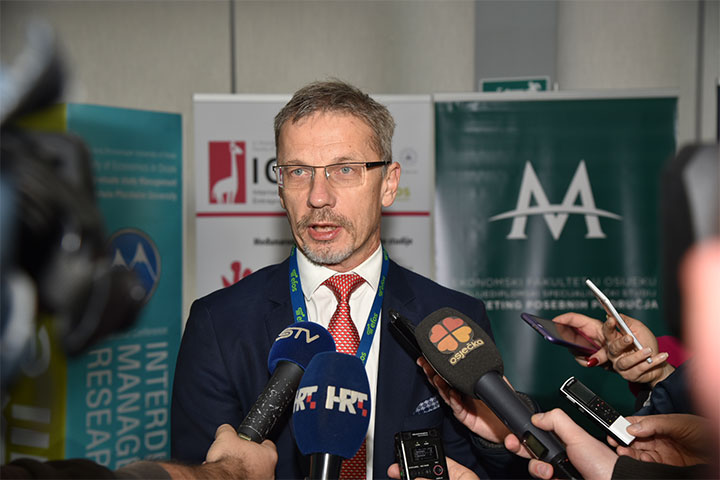 "There is a widespread public perception that the adoption of the euro will trigger the rise of prices, which is not true; as a rule, the risk of rising prices in conversion is very moderate. The effect of conversion on prices in the new euro area members was temporary and stood at 0.23 percentage points, on average, while the assessment of the impact on the index of consumer prices for Croatia is 0.2 percentage points", said the Croatian National Bank Governor, Boris Vujčić, in his speech at the conference "Strategy for the Adoption of the Euro – Challenges and Prospects", organised today by the Faculty of Economics in Osijek.

The Governor emphasised that citizens had based their perception of the level of inflation on the movement in prices of predominantly cheaper products they often buy, and the rise in prices during conversion had been more expressed precisely in this category. There are efficient measures for the protection of consumers against unjustified rounding of prices, which are the requirements the government intends to set: all retailers would have the obligation of dual price display (both in kuna and euro) six months before and after the adoption of the euro. The dual price display in both kuna and euro is precisely the key measure by which citizens will be protected from potential unfair business practice in price conversion.

In his presentation of other benefits and costs of the adoption of the euro in Croatia, Governor Vujčić clarified that Croatia's joining the euro area would reflect positively on exports, investments and tourism, and that it would result in the decrease in interest rates and the elimination of currency risk. Croatia is the smallest member state of the European Union still using its own currency. On the other hand, the country is highly integrated in the euro area: 75 per cent of domestic savings and 67 per cent of total debt are indexed to the euro, therefore, it is highly exposed to currency risk. The high euroisation of the Croatian economy and the financial system narrows the room for manoeuvre for an independent monetary policy, which means that co-deciding about the single monetary policy of the euro area, at the time of Croatia's accession, would not make a significant difference for the country from its current position.

Željko Lovrinčević pointed out the objective circumstances and arguments in favour of the adoption of the euro, but also expressed his concern that Croatia will be in the downward phase of the economic cycle at the time the euro will be adopted, most likely in six to seven years. For this reason, it is particularly important to maintain fiscal discipline and implement structural reforms in order to prepare for that situation.  Since prices in Croatia are high, the fear from increasing price levels as a consequence of conversion into the euro is not realistic, since there is no room for any sharp increases in prices, Lovrinčević said.

The majority of Croatian exports in goods is pegged to the euro, so that the adoption of the euro would provide additional impetus to exports and higher employment, Zvonimir Savić said, who is Director at Financial Institutions, Business Information and Economic Analyses Sector of the Croatian Chamber of Economy. Representatives of HF Belišće and Žito believe that the adoption of the euro would have a positive effect on their companies' operations, since being export-oriented, as both of them said, they constantly have to express their values in the euro.