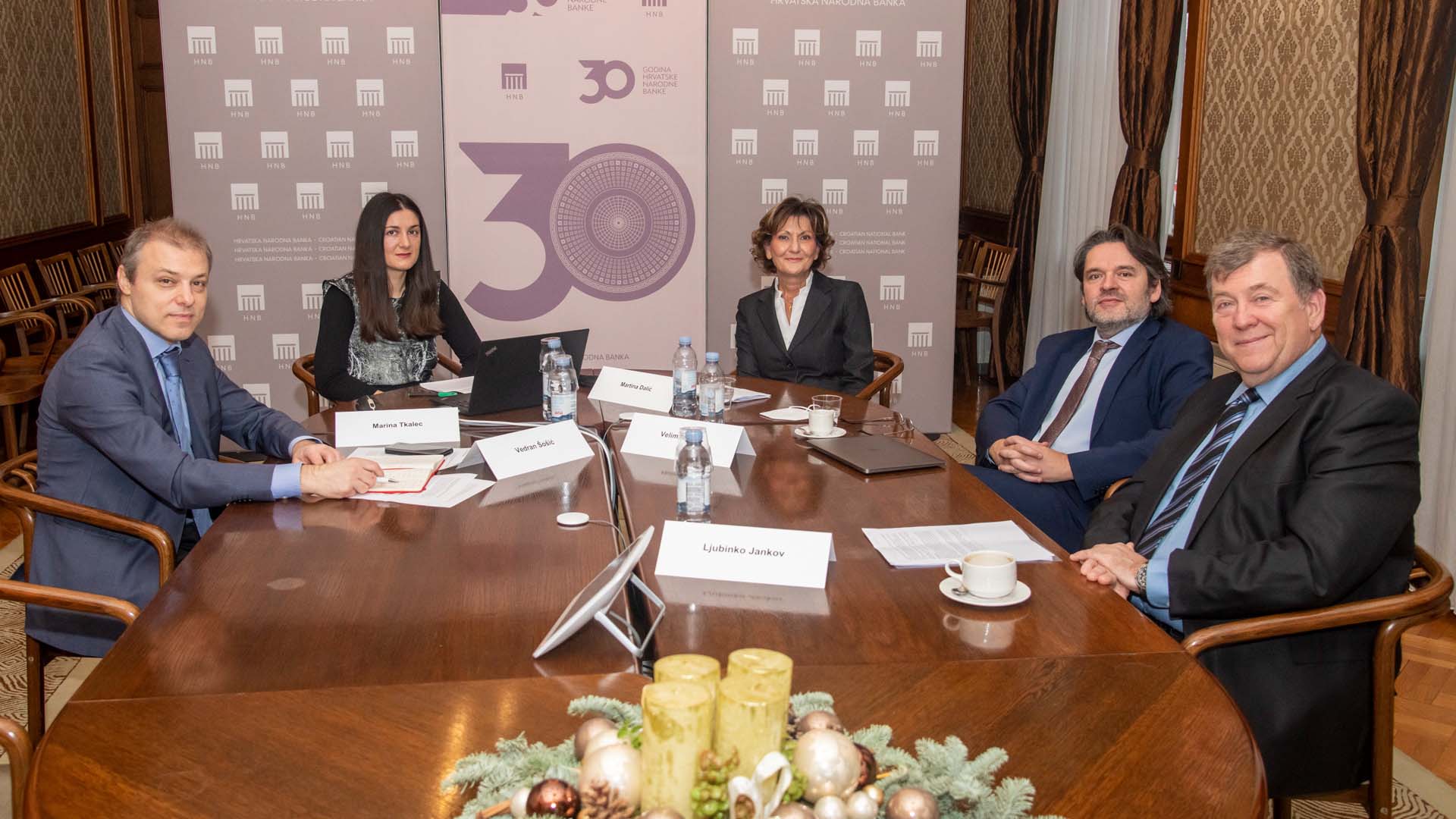 The 4th Research Conference held to mark the CNB's 30 Anniversary

"The monetary regime for which we opted early on, at the beginning of 1990s, after the short period with the Croatian dinar, was a stable exchange rate regime, a quasi-fixed regime that we still use today and will continue to use until we enter the euro area, which I believe, will be in a year. This was a good choice. It enabled stabilisation in a country that had previously gone through a long period of high macroeconomic instability during the Yugoslav era, high inflation rates and frequent devaluations, which continued in the early 1990s during the Homeland War. It was necessary to make this stabilising step by employing the monetary policy regime that has been upheld until this day’, concluded Boris Vujčić, the Governor of the Croatian National Bank, in his opening address by which he today opened the hybrid 4th Research Conference of the CNB‘30 Years of the Monetary Policy".

He stressed that the CNB was never a proponent of excluding supervision from the realm of the central bank's operations, not even when this was popular. "Apart from developing the monetary policy framework through gradual introduction of additional instruments amid new conditions, we also developed supervisory functions in a manner that can make us proud and that enabled us to maintain the stability of the banking system over the past thirty years. We are the only banking system in the Union that has managed to reduce the number of its banks by two-thirds without experiencing a financial crisis. We have also made this banking system a part of the Single Supervisory Mechanism and the Single Resolution Mechanism as a result of it being exceptionally well capitalised and highly liquid. We have fulfilled the central bank’s main objectives – monetary stability, price stability, exchange rate stability and banking system stability’, stressed the Governor, reminding us of the central bank’s independence, in which context he stressed the adoption of the Act on the Croatian National Bank in 2001 as a turning point. ‘This Act provided for the CNB’s independence and independent selection of monetary policy and bank supervision instruments. It also enabled us to build a high quality, efficient and capable institution. Only an independent institution can fully commit to the promotion and selection of the best personnel that ultimately makes up such an institution", added Vujčić.

Dubravko Mihaljek, the Head of Operations at the Monetary and Economic Department of the Bank for International Settlements presented the CNB's monetary policy in a global context. "The growth of the global economy slowed down in the last 30 years – the growth volatility is higher and the curve is interrupted by financial turbulence. The sources of growth changed, geographically, and new technologies emerged. At the same time, monetary and exchange rate regimes changed significantly. Target inflation has been gradually introduced starting from the 1990s and central banks strengthened their independence. The decade was also marked by preparations for the introduction of the euro and creation of the euro area, which led to significant institutional changes in Europe. After the big financial crisis and pandemic recession, the central banks significantly increased their tool kit, reduced interest rates to zero or below zero, the coordination between the monetary and fiscal policies was strengthened and central banks' balance sheets were utilised for the purpose of monetary policy transmission, especially in the euro area. On this long and challenging journey of the last 30 years, the Croatian economy and the CNB’s monetary policy went along with global trends", said Mihaljek.

In the first panel discussion "A review of 30 years of monetary policy", Martina Dalić (Chairwoman of the Management Board of Podravka), Ljubinko Jankov (Executive Director of the CNB's Research Area), Damir Odak (a Member of the ECB’s Administrative Board of Review and a former CNB Vicegovernor), Velimir Šonje (Director, Arhivanalitika) and Vedran Šošić (CNB’s Chief Economist) discussed Croatia’s monetary policy from its stabilisation in the 1990s onwards, the use of monetary policy instruments, liberalisation of the banking market, protection of the financial system from risks, exit from recession, new economic growth, the pandemic and the introduction of the euro. 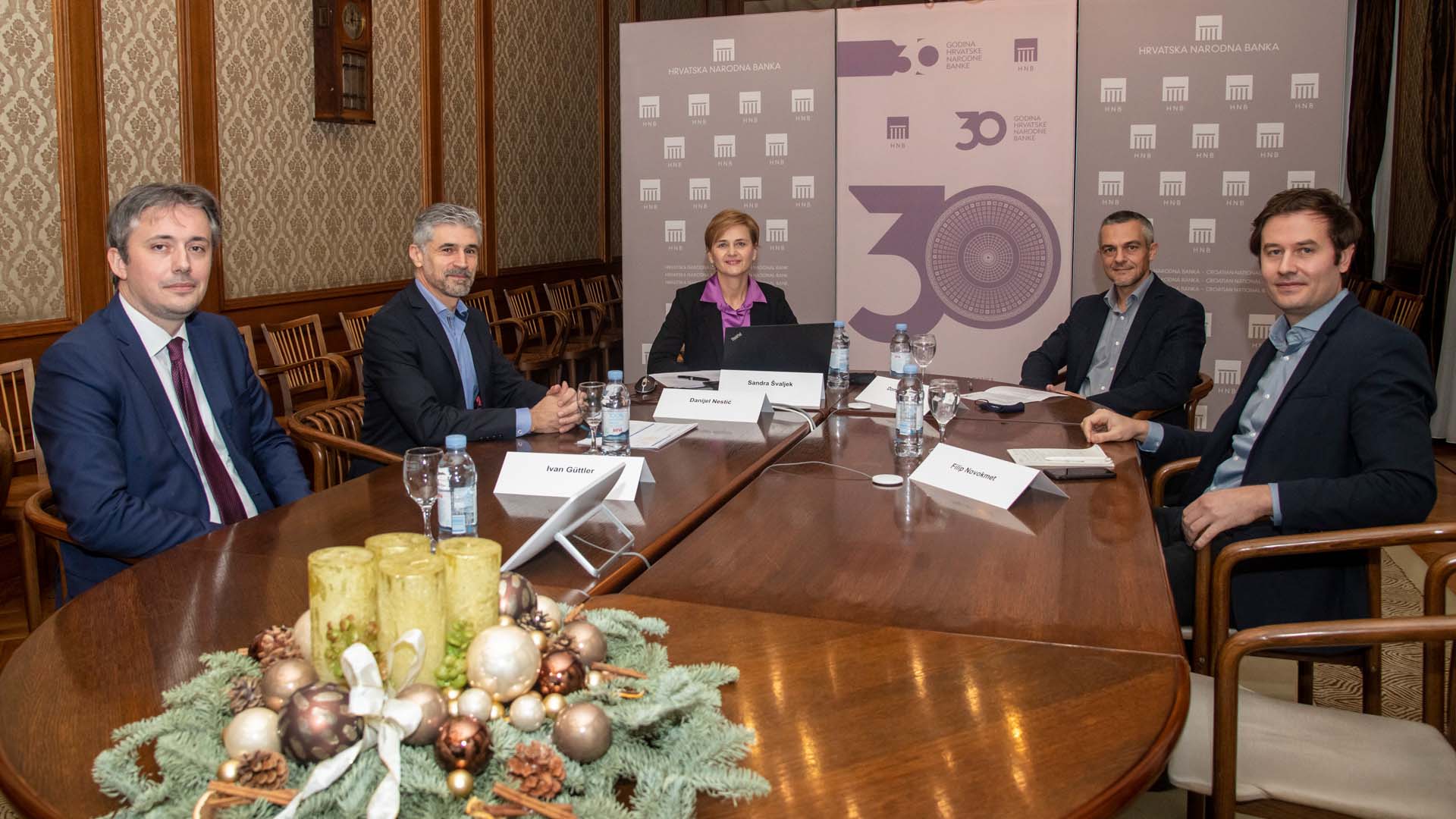 The second panel discussion "The new challenges for the monetary policy" concentrated on the topics of digital currencies, climate changes and social inequalities. The answers to the new challenges that lie ahead were attempted to be provided by Ivan Güttler (Senior Advisor, Meteorological Research and Development Sector, Croatian Meteorological and Hydrological Service), Ivo Krznar (Deputy Division Chief, International Monetary Fund), Danijel Nestić (Senior Research Fellow, The Institute of Economics, Zagreb), Filip Novokmet (postdoctoral researcher at the Institute for Macroeconomics and Econometrics, University of Bonn, and a research fellow at the World Inequality Lab) and Domagoj Sajter (Full Professor and Chair of Finance and Accounting at the Faculty of Economics in Osijek, Croatia).

Vedran Šošić, the CNB’s Chief Economist concluded in his closing remarks that the crises of the 1990s were important because they created the preconditions for a bold experiment – the creation of the CNB as a strong and independent monetary policy creator and banking system regulator. "This was probably one of more successfully experiments in the history of independent Croatia and it lay the foundations for more than two and a half decades of monetary and two decades of financial stability. The CNB used the trust it received well – the financial stability became the norm, the exchange rate and inflation never spiralled out of control and the CNB successfully experimented with different measures that later on became known as macroprudential policy. The macroprudential policy prevented the global financial crisis to cause instability in Croatia’s financial system, although it was followed by a local episode of corporate and retail overindebtedness. We learned an important lesson on consumer protection from the experience. The latest health crisis was a ‘graduation’ of sorts in central banking. With its securities purchase programme the CNB joined a relative small group of central banks outside the circle of most developed monetary areas that initiated such programmes. We expect to join the euro area soon, that is, the system of central banks that have adopted the euro, which will even more strongly integrate us with a big research community from which we will greatly benefit but to which we will also strive to make our contribution" said, among other things, the CNB’s Chief Economist.