The results of the fixed effects panel regression confirm predictions of the trade-off theory. The pecking order theory was also confirmed for some indicators (Table 1).

Notes: Data refer to estimated coefficients in Table 2 (down). The plus sign (+) denotes positive coefficient and (-) denotes negative coefficient. Coefficient is significant if confirmed at 1% or 5% threshold.
Source: Author's calculation based on FINA and CNB data.

Firms' indebtedness correlated with size, asset growth, interest tax shield and liquidity, as predicted by the trade-off theory, as coefficients in all models were of the expected sign. The negative link between profitability and indebtedness was consistent with the pecking order theory. Collateral was positively related to firms' indebtedness, as predicted by both theories. Profitability and indebtedness were negatively correlated, which is consistent with the pecking order theory.

In both theories, collateral is positively correlated with indebtedness. Data confirms this hypothesis only for long-term debt, while for short-term debt this correlation is negative for debt in both domestic and foreign currency. Amortisation is not part of these two major theories, but the theoretically expected negative relation between amortisation and indebtedness was confirmed in all models with significant coefficients.

The size of the estimated regression coefficients clearly indicates the greater importance of domestic currency for short-term financing, while foreign currency dominates in long-term debt.

The analysed firm-level capital structure factors cumulatively influenced the reduction of all forms of firms' indebtedness during the 2010 to 2018 period. The effect was more pronounced in domestic currency debt, especially in short-term debt, while the impact on foreign currency indebtedness was smaller. On an annual level, from 2013 to 2016, these factors contributed to the reduction of all aspects of firms' indebtedness. During the next two years, however, the negative contribution of these factors was less pronounced due to the positive effect on long-term foreign currency debt, while the negative influence on short-term debt in domestic currency continued. 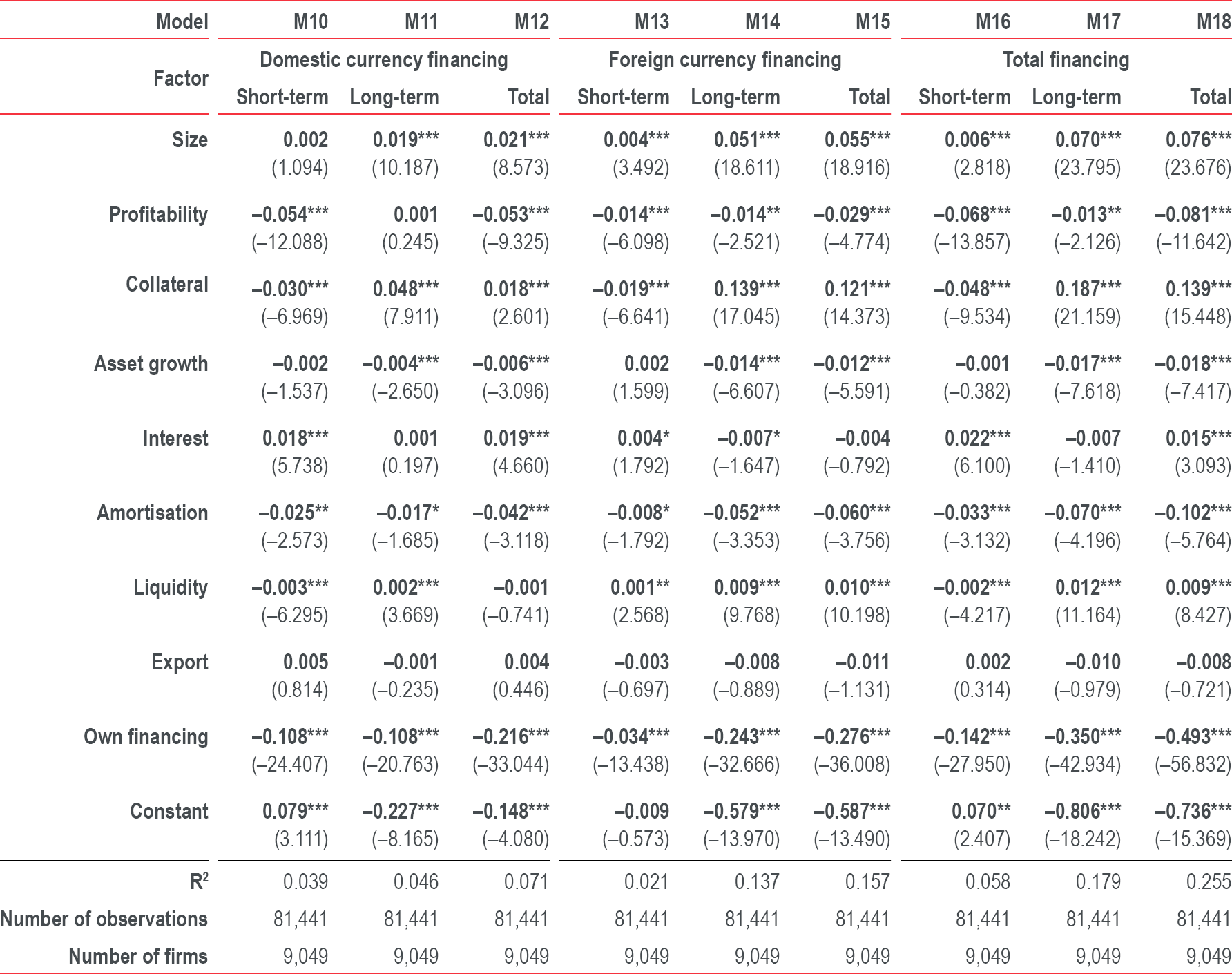 Notes: Dependent variable is firm's indebtedness measured by its bank debt. The model was estimated by panel regression with fixed effects and robust standard errors. Time fixed effects were included in all models, i.e., dummy variables for years for which coefficients are not reported. T-values are shown in brackets. Asterisks *, ** and *** show significance at the 10%, 5% and 1% level, respectively.
​​​​​​​Source: Author's calculation based on FINA and CNB data.