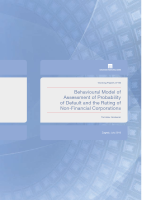 Basel II regulations, which are also incorporated in the Basel III regulatory framework, introduced standards and guidelines for banking risk management. Credit institutions are now free to select one approach, out of the three defined, for the assessment of their risk exposure, focusing on credit risk. If a credit institution has sufficient financial resources, human resources and know-how, it will not rely on the Standardised Approach, which includes regulatory prescribed risk factor measures, but on the Internal Ratings Based Approach (IRB), which requires the institution to meet a number of criteria and prove to the regulatory authority that the internal assessments are adequate and applied in daily operations. The key risk factor under the IRB approach is the probability of default (PD), which is assessed by PD predictive models. The Croatian National Bank has developed a PD model, used for assessment of risk in the non-financial corporations sector, both on the system level and on the level of individual credit institutions, in conditions of high risk concentrations and in stress testing.

This research shows the process in which the PD model was developed and proves that such a model has greater discriminatory and predictive power with behavioural variables than without them. A special emphasis was put on the methodological approach, with its key aspects aligned with Basel II and Basel III regulations, which made significant improvements in the target characteristics of the model: its predictability and discriminatory power.