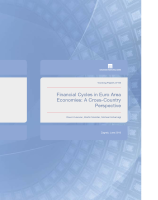 We study the cross-country dimension of financial cycles for six euro area countries using three different methodologies: principal component analysis, synchronicity and similarity measures and wavelet analysis. We find that equity prices and interest rates display synchronization across countries similar to or exceeding that of real GDP. In contrast, our estimates show much lower cross-country synchronization of credit variables and house prices – bank lending to non-financial firms being an exception with relatively large cross-country co-movements. These results are robust across the different estimation methodologies. Concerning time-variation we find evidence for a decline in the extent of co-movements in house prices over time while co-movements in the term spread have increased with the introduction of the European monetary union.