The Effects of Economic Integration on Croatian Merchandise Trade: A Gravity Model Study 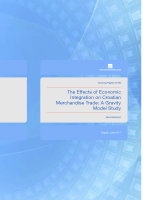 The paper shows that Croatia trades more with higher income and closer countries, which is in line with the standard gravity model assumption, and that a strong bias exists towards trade with countries of the former Yugoslavia. In addition, Croatian accession to the European Union proved to affect trade positively. On the other hand, free trade agreements signed with non-EU countries do not have a statistically significant and positive effect on Croatian trade. Although the positive impact of Croatia's membership in Central European Free Trade Agreement (CEFTA) did not prove to be robust, this could be explained by its strong overlap with the group of countries from former Yugoslavia. Additionally, it was found that the crisis affected the determinants of Croatian exports and imports in different ways and that some disparities exist between trade in goods and trade in goods and services.