What is Driving Inflation and GDP in a Small European Economy: The Case of Croatia 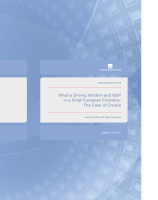 In this paper we estimate and identify a small open economy Bayesian VAR model in order to disentangle the contribution of individual domestic, euro area-specific and global shocks to domestic macroeconomic developments. Our identification suggests that foreign (global and euro area - specific) shocks have a large impact on the variability of domestic variables - they account for approximately 40% of variation in GDP growth and around 50% of variation in inflation. Looking at the contribution of individual structural shocks our results emphasize two particular findings. First, low oil prices have played an important role for muted inflation in Croatia during the last two years while, at the same time, domestic real activity has not benefited much. We show how this finding depends crucially on the specific mix of economic shocks underlying the movements in oil prices (demand vs supply shocks). Second, our results suggest that the large-scale asset purchase programme launched by the ECB at the beginning of 2015 resulted in favourable, albeit limited, spillover effects on domestic economy.