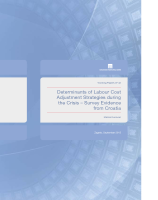 This paper analyses labour cost adjustment strategies implemented during the 2010-2013 period by Croatian firms as a response to the prolonged deterioration in economic conditions, and their main determinants. The analysis is based on an ad-hoc company survey that was developed within the Wage Dynamic Network of the European Central Bank and conducted on a sample of Croatian firms in mid-2014. The main results are as follows: (1) most firms in Croatia experienced negative economic shocks, but the vast majority of firms are still reluctant to adjust base wages and prefer to reduce labour costs by reducing labour input; (2) nevertheless, incidence of wage cuts more than doubled over the years, pointing to a dissipation of nominal wage rigidity in Croatia; (3) the probability of adjusting labour costs is strongly influenced by negative changes in the economic environment a firm has been exposed to; (4) firm level and worker characteristics also turned out to be significant in the determination of the probability of labour cost adjustment and (5) restrictions created by collective bargaining and indexation are found to be important in reducing the likelihood of wage adjustments.