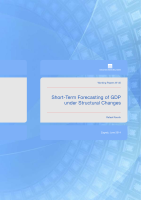 This paper proposes several models with time-varying parameters, estimated by Bayesian techniques used for the shortterm forecasting of Croatian GDP. In addition to domestic variables, the models include EU GDP, so that the specificities of a small open economy have been taken into account. The predictive ability of the models is compared with the naive benchmark forecast. The results indicate that the modelling of time-varying parameters improves GDP forecasts in comparison with the naive benchmark model, and in addition, it has been established that mean forecast errors for all tested models with time-varying parameters are smaller than the errors of equally specified fixed parameter models.