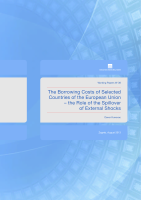 During the recent European public finance crisis the reactions of policy makers were largely motivated by the mounting spreads in the financial markets. But it is not clear to what extent risk premia on the markets really reflect the dynamics of economic fundamentals and to what extent they are determined by other factors. Bearing in mind that market sentiment can trigger divergence in spreads from the levels implied by the fundamentals, this paper draws attention to the importance of the spillover of external shocks and financial contagion on the price of borrowing in selected EU countries and in Croatia. The analysis carried out shows that the measure of spillover and contagion employed in the paper was the dominant factor in explaining risk premia during the recent crisis of public finances. The results also hold true for the levels and for the variability of spreads. From this point of view the spreads relating to Croatia are no exception - the variations in them were much higher than those that could be expected to derive from the dynamics in fundamentals. Nevertheless, it has to be said that such results do not imply that markets ignore movements in fundamentals. Thus a decomposition of spreads in Croatia over the last two years of the sample observed (from the second quarter of 2010 to the second quarter of 2012) indicates a constant rise of the adverse impact of fundamentals on Croatian spreads, which does not hold good for other countries of Central and Eastern Europe, which are often used as comparisons when analysing the risk associated with Croatia.