Estimating the Impact of Monetary Policy on Household and Corporate Loans: a FAVEC Approach 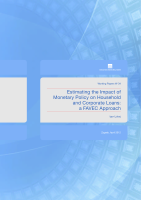 The paper tests the presence of cointegration by estimating the impact of monetary policy on household and corporate loans, while taking account of developments in the macroeconomic environment. The testing is applied using the Johansen procedure based on a factor-augmented vector error correction model (FAVEC model), which is augmented by the factor of the macroeconomic environment, for the period from January 2003 to December 2010. Factor analysis is used to estimate the macroeconomic environment factor, which reflects developments in domestic economic activity based on a large number of time series. The monetary policy indicator, which adequately represents the complexity of the CNB measures, is also defined. The paper confirms the existence of a long-run relation between household loans, the macroeconomic environment factor and the monetary policy indicator. At the same time, no such a relation was confirmed for corporate loans. This is probably due to the fact that, in contrast to households, enterprises raised substantial funds from other financing sources (particularly abroad) in preceding years, and not only from commercial banks. This has limited the impact of monetary policy on corporate loans. Impulse response functions estimated on the basis of the FAVEC model showed that a restrictive monetary policy shock leads to a decrease in household loans, while a positive shock in the macroeconomic environment factor, which generally represents an increase in overall economic activity, has a favourable impact on bank loans to households. The identification of the long-run relation yields the conclusion that CNB measures were justified; without them credit growth would certainly have been larger, which means that external imbalances in the Croatian economy would have been worse. On the other hand, the recent crisis and the halt in bank lending coupled with the weak credit channel of monetary policy in Croatia limited the impact of incentives for credit growth. This could in future undermine the longrun relation estimated in this paper.