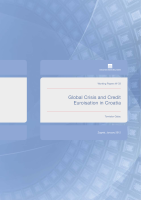 Macroeconomic policy makers in Croatia need to decide whether they want to continue to accept an extremely high level of credit euroisation in the country and limit the related currency-induced credit risk by nominal exchange rate stabilisation and additional capital buffers of banks or whether they want to take active measures to reduce credit euroisation in the country. An analysis of the causes of the high level of credit euroisation is the first step in selecting the potentially most effective measures for its reduction. This paper analyses the evolution of credit euroisation in Croatia from 1995 to early 2010 to identify its possible causes. Based on the analysis made and a review of the recent literature, also discussed are possible measures to encourage credit de-euroisation in the country. In contrast to the prevailing opinion, it is not concluded that the main cause of the high level of credit euroisation in the country is the firmly entrenched deposit euroisation in combination with the legal obligation of banks to limit their exposure to direct currency risk by continuously adjusting the currency structure of their assets and liabilities. Quite the opposite, the causes of the high level of credit euroisation, at least in the period after 2003, should be sought in the firm entrenchment of credit euroisation itself due to historical, political and economic factors, while the high level of deposit euroisation reflects the banks' need to meet the logical legal requirement to match the currency structure of their liabilities and assets. The analysis does not exclude the possibility that the global financial and economic crisis halted the several-year downward trend in credit and deposit euroisation, which would have continued otherwise. Analysed also are central bank measures over the last seven years to determine which of them contributed to partial de-euroisation from 2006 to 2007. Based on this analysis, if economic policy makers decide to encourage de-euroisation actively and assuming that the existing monetary policy framework and financial sector regulations are maintained, it is recommended that the emphasis be put on the following from a series of measures cited in the economic literature: 1) the public sector should increase its borrowing in the domestic currency, if possible, and it should borrow more frequently, in smaller amounts and with maturity periods as different as possible, so as to establish the benchmark local currency yield curve; 2) a levy should be introduced on the interest paid on non-kuna loans to encourage a gradual substitution of foreign currency-denominated loans by kuna loans; and 3) various reserve requirement or remuneration rates should be applied to kuna and non-kuna deposits to encourage deposit de-euroisation. In the design and implementation of these measures, special attention should be paid to limiting their possible side-effects. This can be aided by the central bank's experience in implementing monetary and prudential measures over the last decade.