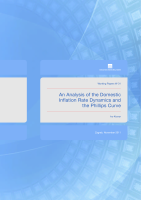 This paper estimates the New Keynesian Phillips Curve in order to describe the structural characteristics of the Croatian economy explaining the dynamics of the domestic inflation rate. The results of the estimation of numerous specifications of the Phillips Curve show that a hybrid version of the New Keynesian Phillips Curve provides a better explanation of the dynamics of the domestic inflation rate than other forms of the model. The main determinants of trends in the domestic inflation rate are past and expected inflation and the real marginal cost of production, which in addition to the labour share, also includes foreign imported prices. The values of the estimated parameters of the hybrid New Keynesian Curve show that the expected inflation rate plays a much more significant role in determining current prices than past inflation. In addition, the estimated parameter of the frequency of price change is low, with enterprises changing prices on average every eight quarters.