The Central Bank as Crisis-Manager in Croatia - A Counterfactual Analysis 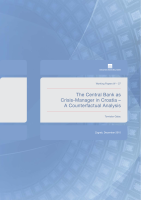 We examine the recent role of the central bank as crisis-manager in Croatia, as a case study for what may be considered small, open, catching-up, emerging market economies with rigid exchange rate arrangements and a high degree of financial integration. These countries were characterised by abundant capital inflows during the 2000s, especially debt flows, with both positive and negative consequences for their economies. To fight the negative aspects of debt inflows, the central bank in Croatia has persistently pursued counter-cyclical policies since 2003 until the onset of the global crisis of 2008/09. During the crisis period, we find that not only was the central bank crisis management role critical in ensuring the stability of the exchange rate regime and the banking sector, but its actions also contributed to attenuating the cyclical downturn triggered by the global crisis. We use our findings to argue that this would not have been possible had the central bank pursued a more accommodating policy during the period of steady growth prior to the crisis.