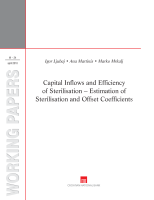 This paper aims to explore to what degree the Croatian National Bank (the CNB) sterilised capital inflows in the period from 2000 to 2009 by estimating a sterilisation coefficient, and to explore to what degree the central bank's activities in the domestic market spurred additional capital inflows by estimating an offset coefficient. The sterilisation coefficient was estimated through the estimation of the monetary policy reaction function, while the capital-flow equation was used to estimate the offset coefficient. Econometric estimation (2SLS) was used to find the relevant explanatory variables that enabled the estimation of the mentioned coefficients. According to the estimated coefficients it may be concluded that during the period under review the CNB was conducting a policy of strong, but not full sterilisation of foreign inflows. However, by using monetary policy instruments the CNB, to some degree, also indirectly contributed to additional capital inflows. Nevertheless, estimated coefficients indicate that despite the liberalisation of capital flows and their continued strengthening, the central bank managed to preserve the relatively high autonomy and efficiency of its sterilisation policy.