The Impact of the Financial Crisis and Policy Responses in Croatia 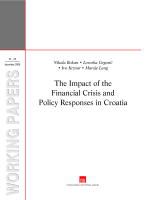 We conduct simulations of the impact of the financial crisis on the Croatian economy using the newly developed DSGE model for Croatia. The impact of the crisis is modeled by proxying it with two distinct shocks: an increase in the foreign interest rate (cost of foreign borrowing) and a drop in export demand. Furthermore, we introduce a monetary policy response in the form of regulatory requirement reduction. The results to a large extent match the actual data, confirming the early impact of the crisis. More precisely, the financial crisis led to a significant slowdown in real activity, international trade and financial aggregates. Real activity is in decline, despite significant monetary policy response. With a monetary policy regime based on a stable exchange rate, the central bank is limited in its attempt to counter the impact of foreign shocks and significantly stimulate real activity by adjusting the regulatory framework. By decreasing the regulatory burden and thereby increasing bank liquidity, the CNB has managed to offset the negative impact of foreign shock(s) only partially and to a small extent. However, this limited success must be evaluated in the context of a highly euroized small open economy, where the primary goal of the monetary authority is to keep the exchange rate broadly stable.