How Competitive Is Croatia's Banking System? 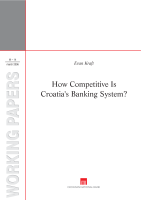 Since 1998, the number of banks operating in Croatia has decreased substantially, and some measures of concentration, including the CR5 ratio and the Herfidahl-Hirschman Index, have grown. Nonetheless, interest rates and interest rate margins have fallen, and the range of products and services available has increased dramatically. This paper reviews both the industrial organization literature in general and the literature on bank mergers in particular to show that market structure does not uniquely determine the degree of competition; increased concentration and increased competition are in fact theoretically quite compatible. For these reasons, the degree of competition must be studied empirically through analysis of market outcomes. In accordance with this, in its empirical sections, the paper provides several tests of the level of competition in Croatia's banking system. According to the Panzar-Rosse h-statistic, he level of competition in Croatia is quite similar to other European banking systems. The Lerner Index method, which provides a rigorous estimation of mark-ups, shows increases in competition during 1995-97 and 1999-2001 or 2002, coupled with strong growth in efficiency. These results, along with decompositions of profitability gains, suggest that competition has indeed increased, but that Croatian banks have increased efficiency enough to maintain strong profitability in the face of increasing competition.