Structural Changes in Employment: Where We Are, How We Got There and Where Are We Going To? 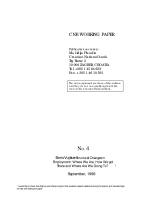 The process of transition is characterised by deep structural changes throughout the entire economy. The changing economic structure - most notably the change in ownership structure and importance of different segments of the GDP - is reflected in the structure of employment. This is a simple consequence of the fact that the demand for labour is derived from the demand for goods and services that it helps to produce. Demand for goods and services, however, is not necessarily pure market demand, immune from government interference, but also reflects preferences of the government. Therefore, the analysis of the labour market creates the complementary background for the analysis of the overall structure of a particular economy and its developments. The aim of this paper is to analyse the transitional change in employment in Croatia. This analysis will primarily attempt to identify and quantify some of the changes in the sectoral structure of employment. The impression is that, so far, relatively little attention has been paid to the analysis of transitional change in the Croatian labour market, and when such analysis is available, in principle, too much weight is assigned to the analysis of the problem of unemployment. This is most likely a consequence of three interconnected reasons. First, the unemployment rate in Croatia is worryingly high (16-17%) according to the official method of recording 1 which was, until the recently conducted Labour Force Survey, the only methodology applied. Second, unemployment is not only a serious economic and social problem, but also a sensitive political problem. Third, domestic economists, are often influenced by "western" literature, which in recent times has devoted a great deal of attention to the problem of unemployment in the EU. Our impression is, however, that economists who analyse transitional labour markets such as the Croatian one, might have good reasons to assign more weight to changes in the employment structure than to the unemployment problem itself. Why is the analysis of the changing employment structure more important than the unemployment problem? First, the analysis of the characteristics and changes in employment covers a considerably wider spectrum of the population and nearly the entire structure of the domestic economy. Second, such analysis is especially relevant to the transition economy when a country passes from one economic system to another, and undergoes deep structural changes in employment. Third, unemployment is by and large the reverse side of the employment story, i.e. the capability of the economy to create new jobs. As suggested by Jackman and Pauna (1996), the first step in the analysis of structural change in employment might be to determine an end target of the transition process. If the primary economic (and political) goal of the transition countries in Central and Eastern Europe is to join the developed countries of the EU, which also implies entry into the western economic structures such as the WTO, OECD, and eventualy EMU, then it is likely that the structure of their economies, and also labour markets, will gradually adjust to become more like those developed countries.Therefore, employment structure in the countries of the EU/OECD could be taken as a relatively good approximation of the target for transitional change. Taking the employment structure of the EU as an (approximate) target of the transition, this paper will try to answer several questions: 1) how far is the Croatian labour market from its anticipated long-term structure, 2) what is the speed of structural change, 3) are we moving in the right direction, and 4) what is Croatia's position in relation to other transition countries of Central and Eastern Europe.