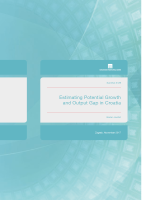 The purpose of this paper is briefly to present and compare the results of potential growth rate and output gap estimation for Croatia in the period from 1996 to 2016 obtained using three different methodological approaches – the HP filter, the production function method and the multivariate filter (MVF). The results obtained suggest that there are significant quantitative differences between individual estimation methods, so that their use in further calculations calls for caution. The analysis shows that after the global financial crisis, potential growth of the domestic economy and the output gap remained negative over a prolonged period, which is in line with the estimates regularly published for Croatia by the European Commission (EC). It is worth noting that total factor productivity made a small contribution to potential growth rate during the entire period observed and that its growth was much lower than in most European Union countries. This suggests that there are structural problems in the domestic economy that hinder a more effective utilisation of the existing resources.