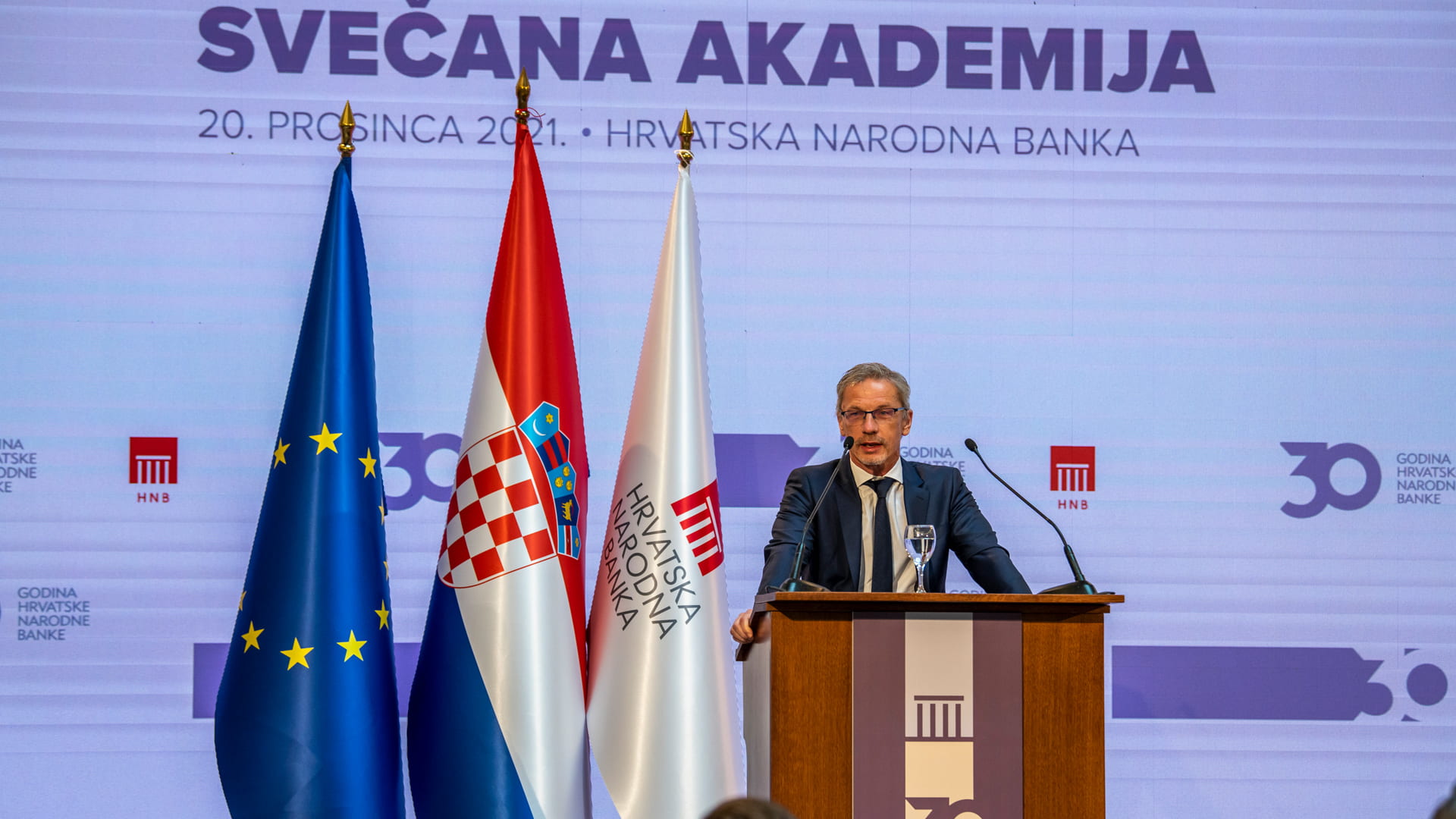 "In the past thirty years we have been successful in contributing to overall stability and the creation of favourable conditions for economic development. There are facts to support this claim. The Croatian society has entrusted us with two major tasks – maintenance of price stability and preservation of financial system stability. We have achieved both objectives. Our institutional memory reminds us that ever since its beginning, the Croatian central bank has supported the position that, together with building its own monetary system, Croatia needs to take part in integration processes as soon as possible and ultimately join a monetary union with other European countries in order to achieve its own social and economic interests", noted CNB Governor Boris Vujčić at the Anniversary celebration on the occasion of 30 years of the Croatian National Bank. The Governor pointed out that the Croatian National Bank is today a member of the European System of Central Banks and the banking union and is soon to become a member of the Eurosystem. "The CNB is already an equal partner in this context, which gives us the confidence and conviction that the CNB will not only be one of the central banks of the euro area, but will also make a meaningful contribution to its further development, to the benefit of both the national and European economy and society. In 30 years of its existence, the Croatian National Bank has developed into a modern, autonomous and highly professional institution with a high level of integrity and competence. I would like to express my gratitude to all those who devoted their professional life to that purpose and to all those who will come in the future and continue to demonstrate the same enthusiasm for the profession and serve the general public good", noted the Governor. 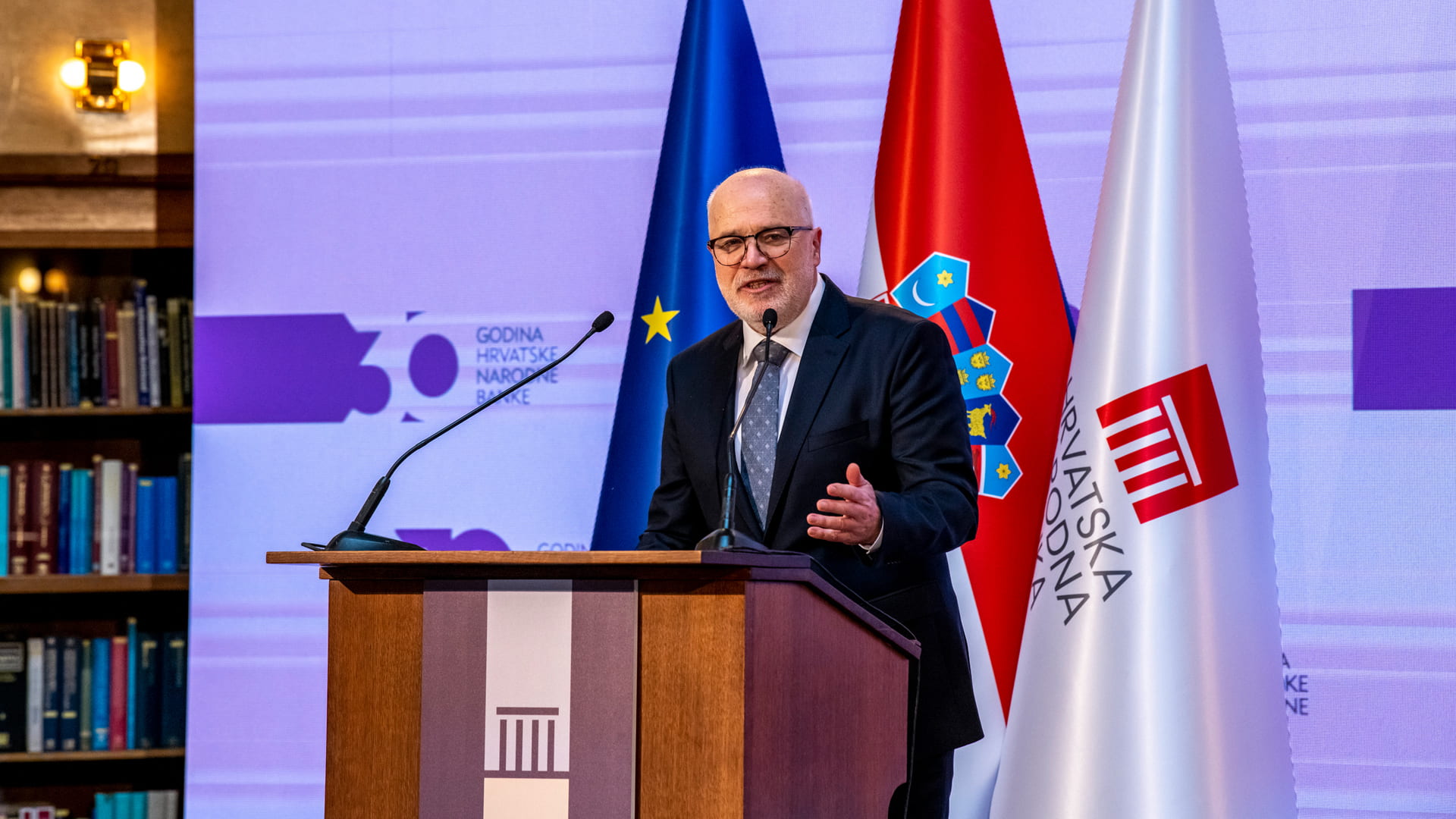 Former CNB Governor Marko Škreb shared the three lessons he has learned in the past thirty years. "The first lesson is that we should be humble about our knowledge of economics. In mid-1990s, like most central bankers around the world, I was convinced that the maintenance of price stability was the one and only task of a central bank. All I can say now is o tempora, o mores. While economics has been dealing with similar questions for the past fifty years, its answers have evolved over time. The second lesson concerns the importance of team work. The fact that we are today celebrating the 30th anniversary of the independent Croatian National Bank is definitely the result of team work of several generations, and such work is possible only if we listen to each other. The third lesson I have learned is that it is possible to love an institution. I have loved the Croatian National Bank with all my heart, first from inside until 2000, and then from the outside. At its beginning, it had no international reserves; they were virtually at zero. Today, the international reserves of the CNB amount to almost 25 billion euro. Without a doubt, the CNB has made a quantum leap in that regard. All objectives and tasks listed in the Act on the CNB: stability of prices, financial systems and payment systems are indeed very important. My personal opinion is that they all make sense only if we bear in mind the ultimate objective – the well-being of people. This is why we should take into account long-term effects", noted Škreb. 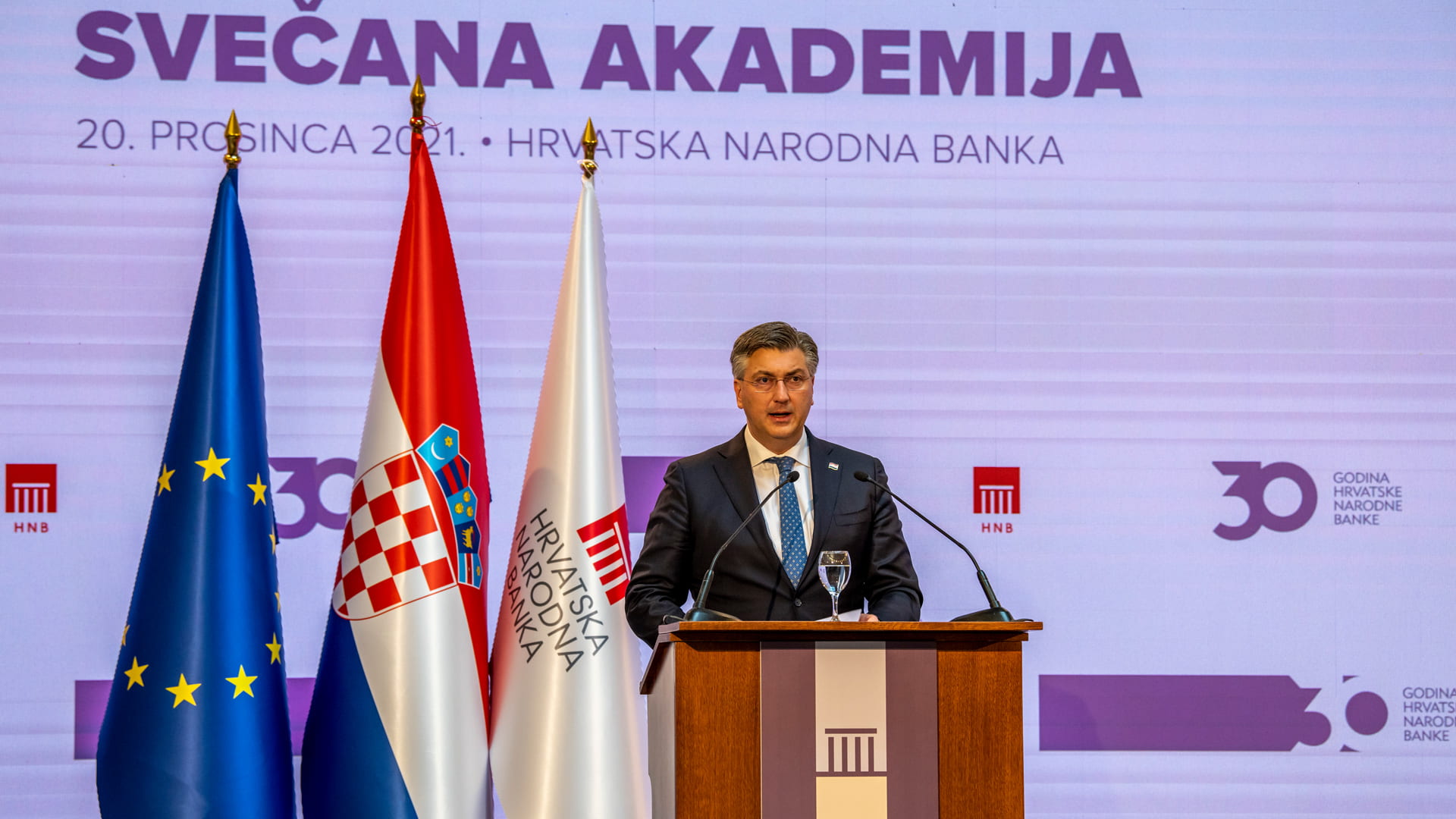 Croatian Prime Minister Andrej Plenković also addressed the gathering. "The anniversary of the key institution of the Croatian monetary system comes during the challenging times of the pandemic and its consequences for the economy, finances, the labour market and the general situation in the Croatian society, but it also comes in the moment of transformation, when Croatia is being rapidly integrated into the euro area. Adoption of the euro will be a key step towards greater competitiveness and economic sovereignty of Croatia. Our goal is to promote national interests by participating in international organisations, primarily the European Union, to raise competitiveness, innovation capacity and resilience of the economy and improve the living standards of the population. I am convinced that, through joint efforts, we will achieve all these goals in this decade", concluded the Prime Minister. 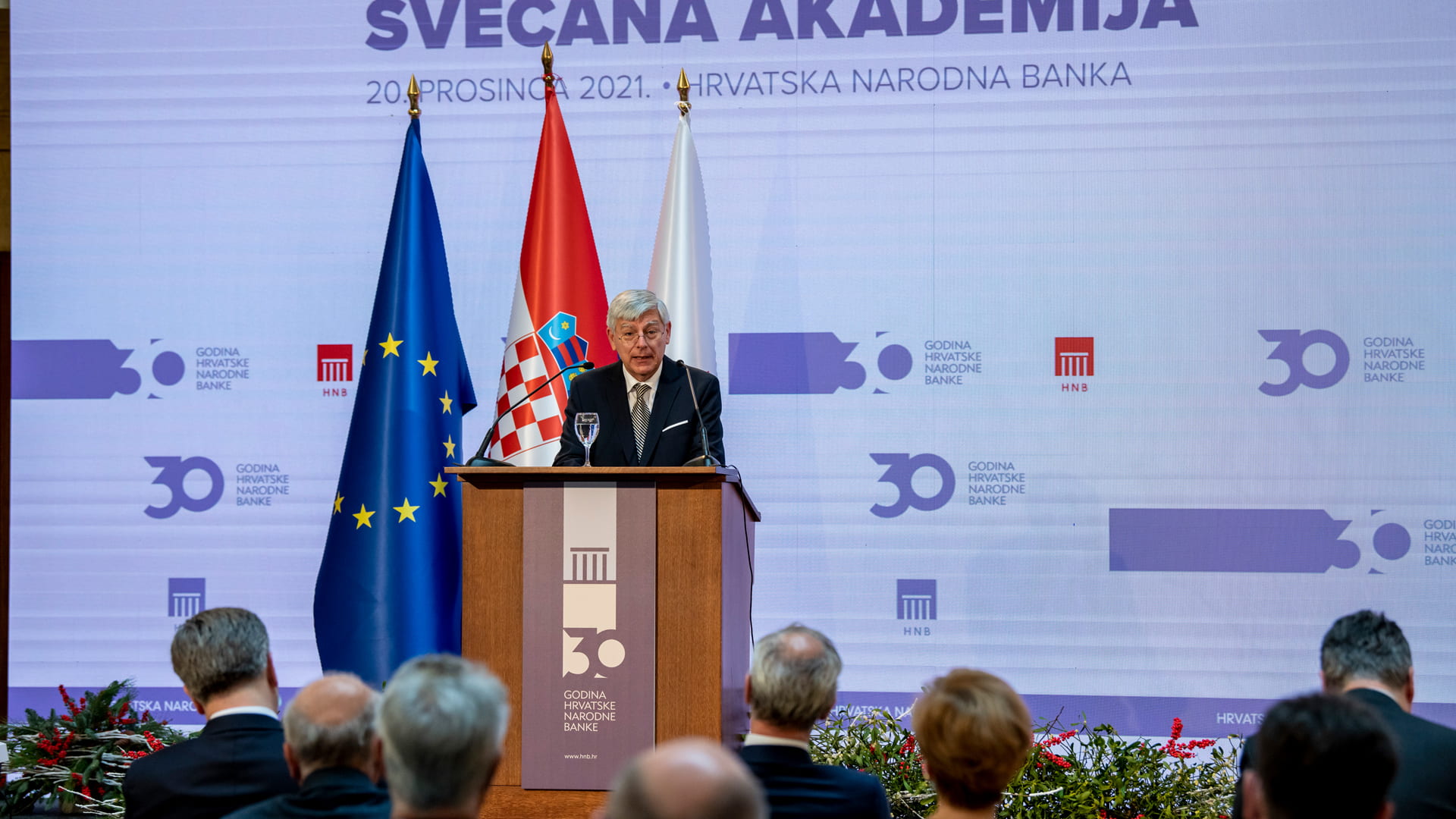 "The Constitution adopted on 21 December 1990 defined the Croatian National Bank as the central bank and one of the elements of Croatian statehood and independence. The Croatian National Bank has a key role in preserving the stability of the national currency kuna introduced on 30 May 1994. However, ever since 1991, Croatia has also aspired to join the European monetary integration process. In May 2018, the Government adopted the Strategy for the adoption of the euro in the Republic of Croatia, thereby starting the process of joining the euro area. The Croatian National Bank is involved in that process from the start. We are firmly committed to joining the euro area in 2023. This will be beneficial for the Croatian economy and financial stability", said Željko Rainer, Vice President of the Croatian Parliament. 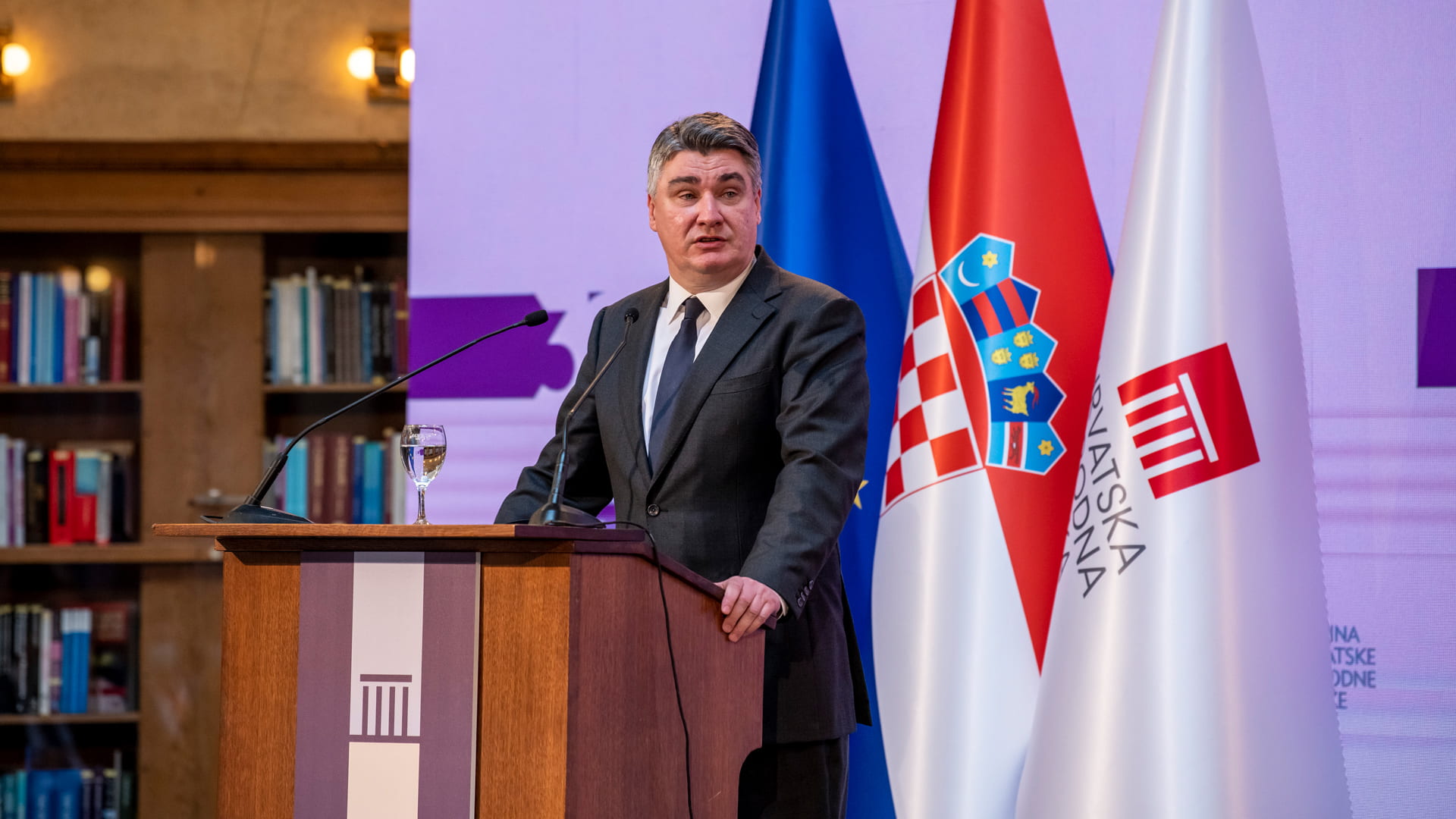 "In the past thirty years, the Croatian National Bank has been one of the two institutions in the Croatian society that has carried out its mission and tasks well and with integrity and that is highly respected. The other is the Croatian Army. The task of maintaining the stability of prices and the financial system has been performed in an exemplary and excellent manner. I believe that Croatia’s entry to the euro area will be beneficial for the Croatian economy because of its structure, which is characterised by a high share of services, in particular tourism. Let us be optimistic. But let us also be sceptical in the interest of our country, without letting this scepticism be an obstacle to decision-making. We should use all the advantages that the euro may bring to our economy, but this may require additional efforts on our part", concluded President of the Republic of Croatia Zoran Milanović.

The film "Thirty Years of the Croatian National Bank" was shown at the celebration, with the event also being enhanced by the performance of the chamber choir "Ivan Filipović" conducted by Goran Jerković.