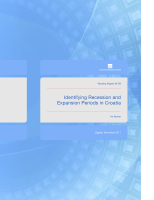 In this paper business cycle turning points in Croatia are determined from early 1998 to the end of 2010. For the purpose of distinguishing the periods of recession from the periods of expansion in the Croatian economy three methods are used: simple analysis of quarterly GDP growth rates, the non-parametric Bry-Boschan algorithm and parametric Markov regime switching model. The results of the Bry-Boschan algorithm and the estimated Markov regime switching model clearly indicate that since 1998 the Croatian economy has undergone two recessions. The first recession ended in mid-1999. The second recession began in the third quarter of 2008 and has not yet ended, according to the data available for the end of 2010. In view of the short period of positive business activity growth in 2010, within the period of negative growth rates lasting from mid-2008, the simplest analysis of the quarterly growth rates on the basis of the "two consecutive negative (positive) GDP growth rates" cannot explain clearly the state of the business cycle in 2010. In the period between the two recessions, a long period of expansion in economic activity of almost nine years was recorded. The conclusions on the turning points separating the recession from the expansion periods are robust to the use of different methods of their determination. All the methods include quarterly GDP growth rate as a relevant measure of movements in the Croatian economy. However, the results of the estimated factor model, i.e. the estimated common component of the set of variables related to GDP, show that the determined turning points are not sensitive to the selection of the variable measuring economic activity.