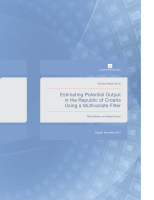 This paper estimates potential output in the Republic of Croatia for the period between the first quarter of  2000 and the fourth quarter of 2010, using a combination of a multivariate Kalman filter and the regularised maximum likelihood method. For the estimation of potential output a dynamic macroeconomic model was developed, similar to that used in Benes et al. (2010), in which core inflation is the key determinant of potential output and the output gap. This is why potential output, as defined herein, can be construed as the level of output that can be sustained in the long run without creating either upward or downward pressures on core inflation. Apart from the aforementioned core inflation, the model includes some other relevant economic series, such as the unemployment rate, retail trade, industrial production index and current account deficit, which, if ignored, as in the case of univariate filters, can result in a potential output estimation bias. The estimation results show that output was below its potential level until the second quarter of 2002, after which it remained above the potential level for almost seven years. In the second quarter of 2009, however, output sank below its potential level, where it remained until the end of the reference period. During the last observed period, both actual and potential output levels declined.