Croatian checkerboard, geographical map of Croatia, marten, Glagolitic script and Nikola Tesla – the motifs proposed to be featured on the Croatian side of euro coins 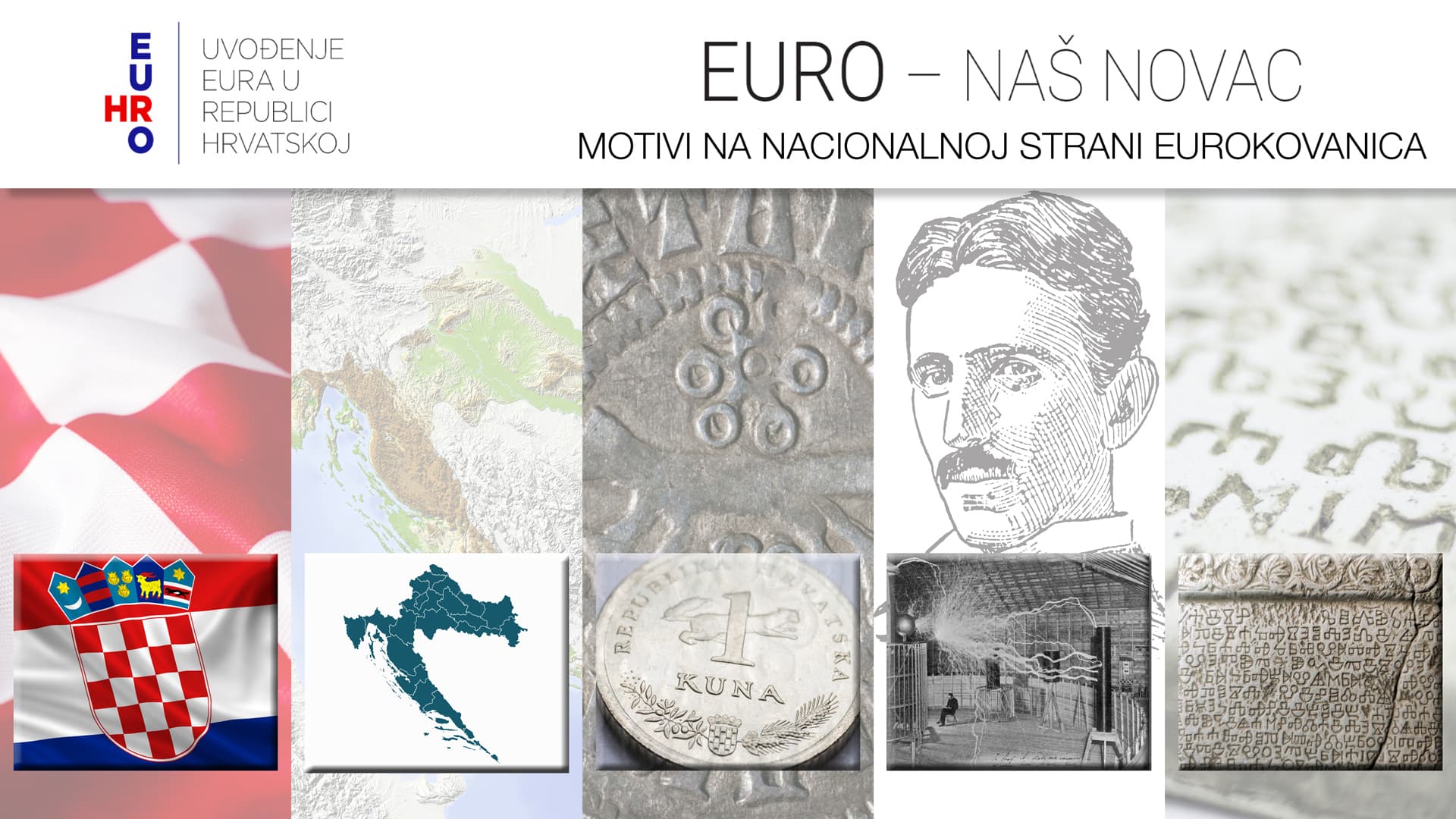 At its session today, the CNB Currency Committee defined the final proposal for the motifs to be featured on the national side of future Croatian euro coins. The proposal will be analysed by the National Council for the Introduction of the Euro as Official Currency in the Republic of Croatia and considered by the Government of the Republic of Croatia. The proposed motifs include the Croatian checkerboard, geographical map of Croatia, marten, Glagolitic script and Nikola Tesla. The checkerboard motif will be used as a background for all coins, while other motifs will be displayed on coins of different denominations: the 2 euro coin will show a geographical map of Croatia, the 1 euro coin the marten, the 50, 20 and 10 cent coins will feature an effigy of Nikola Tesla, and 1, 2 and 5 cents coins the Glagolitic script.

When selecting the motifs, the members of the Council were primarily guided by the acceptability of a particular motif to the members of the public, irrespective of their regional background, age, world-view or political orientation as well as by its national symbolic connotations, that is, the degree of identification by the general public. The motifs were chosen with an aim for them to be representative of Croatia in the international environment by featuring general symbols, leading historical figures, cultural monuments, national landmarks, inventions or historical events. The selection was also guided by the international recognisability of a particular motif as Croatian and by its ability to be depicted on coins of small dimensions as well as by the fact that a proposed motif was not subject to copyright. It was also important to consider the criterion of conversion, that is, a motif’s capacity to facilitate transfer to the new currency both in terms of design and in terms of creating an emotional link between the tradition and the new currency, euro.

The Council's final choice also depended on ratings given to the proposed motifs by citizens who participated in selecting the national side of euro coins via a web survey at the website euro.hr and in a structured national opinion poll carried out on a sample of 1 000 citizens. The motifs rated by citizens included the checkerboard, geographical map of Croatia, marten, Glagolitic script and Dubrovnik. Almost 50 000 citizens participating in the web survey rated each motif on a scale of 1 to 5 (their replies ranging from “I do not like it at all” to “I like it the most”). They could also propose an additional motif (free proposal) according to their own opinion as to which motif would best represent Croatia on the national side of euro coins.

The checkerboard was assigned the highest average rating, followed by a geographical map of Croatia, the Glagolitic script, the marten and Dubrovnik, with the last motif receiving a considerably lower rating than other motifs. Citizens put forward more than 11 000 proposals of their own, the bulk of which were for an effigy of Nikola Tesla. There were 2 599 proposals for Tesla, accounting for more than 20% of total proposals, i.e. Tesla received two and a half times more votes than the second ranked proposal (see the list at the end of the press release).

In the public opinion poll carried out on a sample of 1 000 citizens, the checkerboard received the highest average rating, followed by a geographical map of Croatia, Dubrovnik, the Glagolitic script and marten, with the three last motifs receiving an almost equal number of votes. In this telephone poll only 300 citizens gave their own proposals for the motifs for the national side of euro coins, which also included Nikola Tesla, in addition to the Plitvice Lakes and Croatia’s natural landmarks.

Based on the selected motifs, the CNB will at the beginning of August launch a tender for the design of the national side of euro coins.

At mid-October this year, the CNB will submit the designed motifs to the European Commission and the Council of the European Union, thus presenting them for approval by all euro area Member States.

The National Euro Changeover Plan, adopted by the Government in December 2020, envisages the selection of motifs and their design for the national side of euro coins and designates the Croatian National Bank as the institution that will organise the procurement of euro banknotes and coins. In contrast to euro banknotes, which are identical in all euro area member states, euro and cent coins carry the information about the issuing country and display the national motifs of that country on the reverse side. For this reason, the reverse of the coins is also known as the national side of euro and cent coins. Once Croatia adopts the euro as its currency, euro coins issued in Croatia will be in circulation and have an equal value in all euro area countries.

The selection of the motifs is therefore particularly important because the coins with motifs symbolising Croatia will also be used beyond its borders. Given the complexity of coin production, the preparatory activities have already been initiated.

For details on the procedure of selection of the national side of euro coins see here.

List of motifs/citizens’ proposals that obtained 100 or more votes in a web survey: