Covered bonds – what is the impact of the new regulatory framework on Croatia? 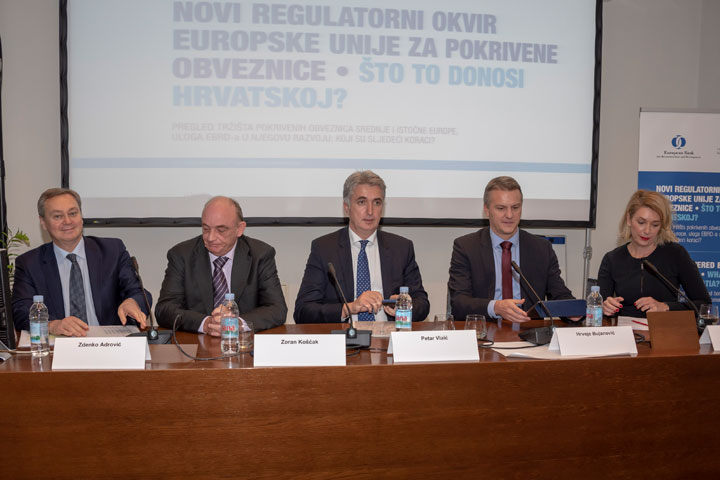 Covered bonds are an important instrument for long-term funding of many European banks, particularly in some EU Member States. The benefits of the use of this debt instrument and the need to strengthen the Capital Market Union have prompted the European Union to start the process of harmonisation of the currently fragmented covered bonds market by implementing a special regulatory framework.

To acquaint the professionals in the field with structural features of covered bonds and the new directive proposed by the European Commission that will regulate their issue, a conference was held in the Croatian National Bank today entitled: New EU Covered Bonds Framework – What is In It for Croatia? The conference was organised jointly by the Croatian National Bank and the European Bank for Reconstruction and Development (EBRD).

The participants were welcomed by Governor Boris Vujčić and EBRD Vice President, Policy and Partnerships, Pierre Heilbronn. Once adopted, the proposed EU covered bonds directive will bring about fresh opportunities for the Croatian banking sector’s issuers of covered bonds as well as for investors, the Governor noted.

Covered bonds are an increasingly important instrument to build local capital markets in countries where the EBRD operates, Pierre Heilbronn said today, stressing that covered bonds can provide long-term funding, and by offering stable returns can attract investors. While other countries in Central Europe have seen significant progress in recent years, Croatia does not yet have specific covered bond legislation, Mr Heilbronn noted.

Governor Boris Vujčić also emphasised that the Croatian National Bank and other regulators would, to the extent necessary, support the implementation of the EU covered bonds framework in Croatia, including the adoption of secondary level legislation within their respective competences and that they would actively seek solutions to any remaining regulatory obstacles.

Ante Matijević, Assistant Minister of Finance of the Republic of Croatia, thanked the CNB and the EBRD for organising the conference and stressed the importance of covered bonds in building the capital market and developing investment potential in Croatia.