The current and capital account of the balance of payments ran a deficit of EUR 0.3bn in the last quarter of 2019, which is an improvement in the balance of EUR 0.3bn from the same period of the previous year. The very favourable results can primarily be attributed to the growth in net services exports and to a lesser extent to the improvement in the balance in the secondary income and capital transaction accounts. However, the positive developments were partially offset by a deterioration in the primary income account balance and widening of the foreign trade deficit.

The decline in the current and capital account deficit in the fourth quarter of 2019 was mostly driven by higher net export of services (EUR 0.3bn), mainly as a result of tourism revenues, which rose by 34.0%. At the same time, foreign trade deficit rose by EUR 0.1bn, with a somewhat faster growth in goods imports than exports (1.5% and 1.0%, respectively). However, the observed deterioration of the foreign trade balance was noticeably lower in intensity than that seen in the same period of the previous year, given that the slowdown in the growth of goods exports (from 2.2% in the previous year) was accompanied by a much more pronounced slowdown in imports growth (from 12.7% in the previous year).

The deterioration in the primary income account from the same period of the previous year (EUR 0.1bn) was mostly driven by considerably higher expenditures on direct equity investments, due to better business results of domestic banks and non-financial corporations in foreign ownership. The deterioration in the primary income account was mitigated by growth in revenues from direct equity investments resulting from higher profitability of foreign enterprises in the ownership of residents and a further growth in revenues from compensation of residents temporarily employed abroad.

The surplus in the secondary income and capital transaction accounts rose by EUR 0.1bn in the fourth quarter of 2019 from the same period of the previous year, largely as a result of higher net revenues from transactions with the EU budget and further growth in net revenues from personal transfers. As regards the structure of revenues from transactions with the EU budget in terms of use, current funds slightly exceeded capital funds (52% and 48%, respectively) while in terms of the end beneficiary sector, approximately 40% of the funds were paid to the government sector.

The net inflow of capital recorded in the direct investment account of EUR 0.3bn mostly involved reinvested earnings of domestic banks and enterprises in foreign ownership. By contrast, the inflow of new direct equity investments was extremely modest and mostly seen in the real estate and accommodation services sectors. At the same time, domestic enterprises continued to deleverage in relation to the affiliated enterprises abroad.

The net capital inflow in the other investment account of EUR 0.3bn in the last quarter of 2019 was the result of a more pronounced decline in foreign assets than liabilities, with the credit institutions reducing their assets the most. By contrast, the decline in liabilities in the other investment account was most pronounced in the central bank as a result of closing a part of repo transactions, even though repo transactions are neutral in terms of the total financial account.[1] In addition to repo transactions, the fall in gross international reserves was also driven by a withdrawal of a foreign currency deposit, deposited by the government over the past months and particularly following the issue of the June 2019 international bond. The government used the withdrawn funds in November to repay the due USD 1.5bn dollar bond, which resulted in a fall in foreign liabilities of the government, i.e. in a net outflow of capital in the portfolio investment account. 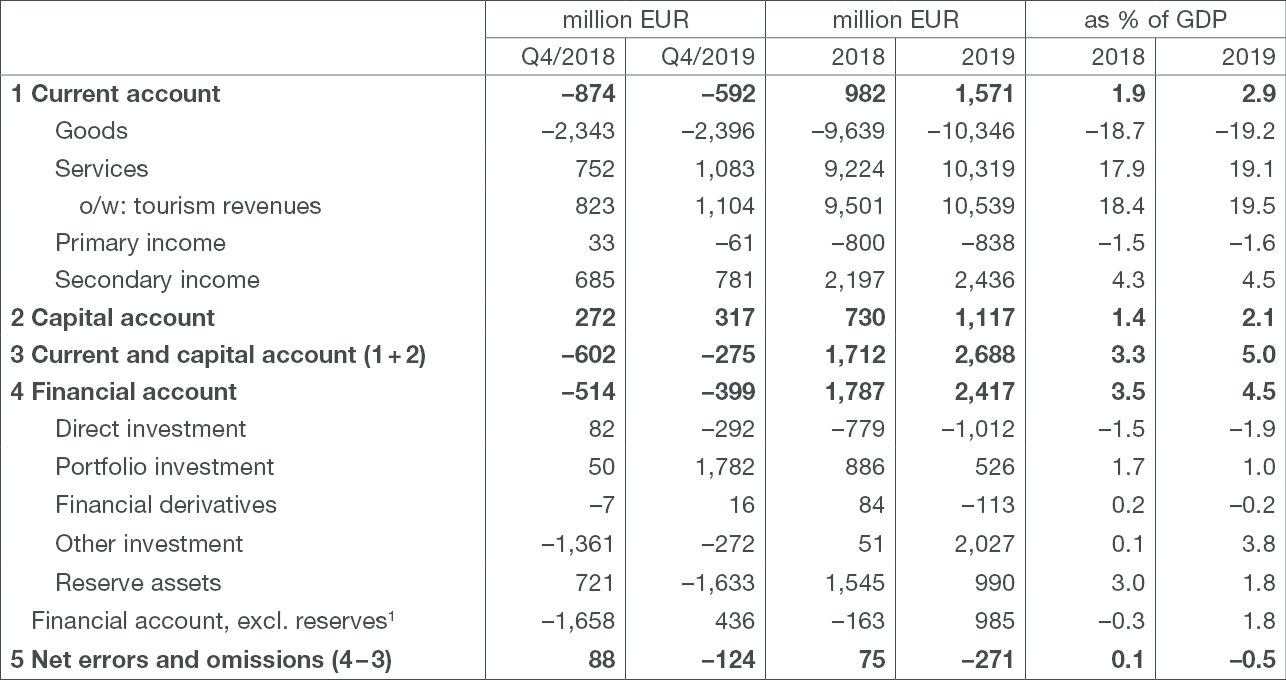 1 Excluding the change in the gross international reserves and foreign liabilities of the CNB (the investment of a portion of reserves in reverse repo agreements results in a simultaneous, same-amount increase in assets and liabilities of the CNB).
Note: The positive value of financial transactions denotes net capital outflow abroad and the negative value denotes net capital inflow.
Source: CNB.

The net inflow of capital in the financial account of the balance of payments has, together with an unfavourable effect of price, exchange rate and other adjustments, resulted in a deterioration in the relative indicators of the international investment position in the fourth quarter of 2019. At the end of 2019, the net international investment position thus stood at EUR –27.4bn, or –50.8% of GDP (Figure 2).

As regards the results on the entire 2019 level, the surplus in the current and capital account of the balance of payments stood at 5.0% of GDP, a sharp increase from 3.3% of GDP in 2018. The improvement in the balance was mostly driven by a further growth in net services exports, particularly tourism, and an increase in the sum of balances in the accounts of secondary income and capital transactions, mostly as a result of greater disbursements from EU funds to end beneficiaries. By contrast, the foreign trade deficit widened and the balance in the primary income account also deteriorated. The recorded net outflow of capital in the financial account can primarily be attributed to the fall in liabilities in the account of other investments as a result of domestic sectors and government deleveraging. Gross international reserves also increased. As a result, the relative indicator of the net international investment position at the end of 2019 was seven percentage points higher than that at the end of the previous year when it stood at –57.9% of GDP (Figure 2). 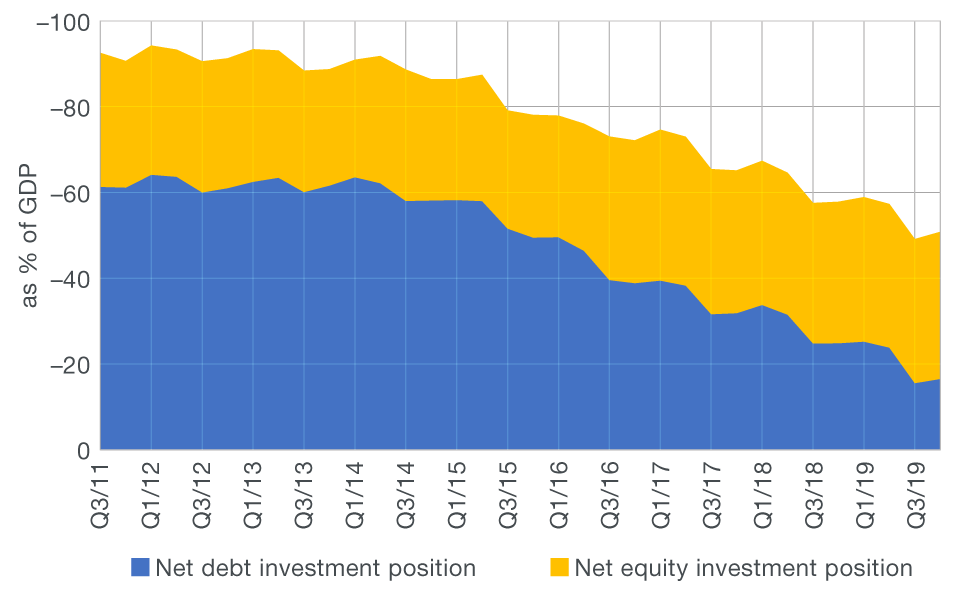