The current and capital account of the balance of payments ran a surplus of EUR 4.2bn in the third quarter of 2018, which is an increase of EUR 0.2bn from the same period of the previous year. This was largely due to the steep rise in net exports of services and, to a lesser extent, the increase in the total surplus in the secondary income account and in the account of capital transactions. At the same time, the larger foreign trade deficit had a major adverse impact on the balance in the current and capital account, with a deterioration also seen in the primary income account. The four quarter cumulative current and capital account surplus was 4.3% of GDP, down by 0.4 percentage points from the 2017 surplus. More precisely, expenditures in the primary income account were lower in 2017 as value adjustments of claims on the Agrokor Group had a negative impact on the current profits of banks.

The foreign trade deficit continued to increase in the third quarter (by EUR 0.1bn from the same period of 2017), with exports growing somewhat faster than imports (8.3% versus 6.8% on an annual level). On the other hand, net exports of services grew sharply, largely owing to tourism, though the annual rate of growth in tourism revenues was noticeably lower than in the same period of the previous year (4.8% versus 9.1%). Net exports of transport and other services, in particular personal services, also increased.

The deficit in the primary income account was wider in the third quarter of 2018 than in the corresponding period of 2017 owing to larger net expenditures on direct investment arising from the improved performance of domestic banks and enterprises owned by non-residents. It should be noted that last year's results were affected by the impact of provisions for loans to the Agrokor Group on bank profits. By contrast, unfavourable developments in the primary income account were largely offset by the upsurge in revenues from the compensation of residents temporarily employed abroad and, to a lesser extent, the rise in the profits of foreign enterprises owned by residents and lower interest expenditures on the external debt of domestic sectors.

The overall secondary income and capital account balance was notably higher than in the same period of 2017, mostly due to larger net revenues arising from transactions with the EU budget, which were particularly driven by the more intense dynamics of payments from European structural and investment funds. End beneficiaries received more capital and current revenues. Net revenues from personal transfers also went up.

The financial account of the balance of payments saw a net capital outflow of EUR 3.1bn in the third quarter of 2018 (EUR 0.4bn more than in the same period in 2017), which was, broken down by account, mostly recorded in the accounts of other and portfolio investments. The strong net capital outflow in the other investment account (of EUR 2.1bn) mostly reflected the notable improvement in the net foreign position of banks during the summer tourist season. In addition, the net foreign position of the government and other domestic sectors also improved slightly.[1] The net capital outflow recorded in the portfolio investment account (of EUR 0.9bn) was principally due to deleveraging on the part of the government, which repaid foreign bonds in July.

Gross international reserves edged up in the third quarter of 2018. They were driven up by the rise in foreign liabilities based on agreed reverse repo transactions, and they were driven down by the withdrawal of central government deposits with the central bank for the purpose of foreign bond repayment. 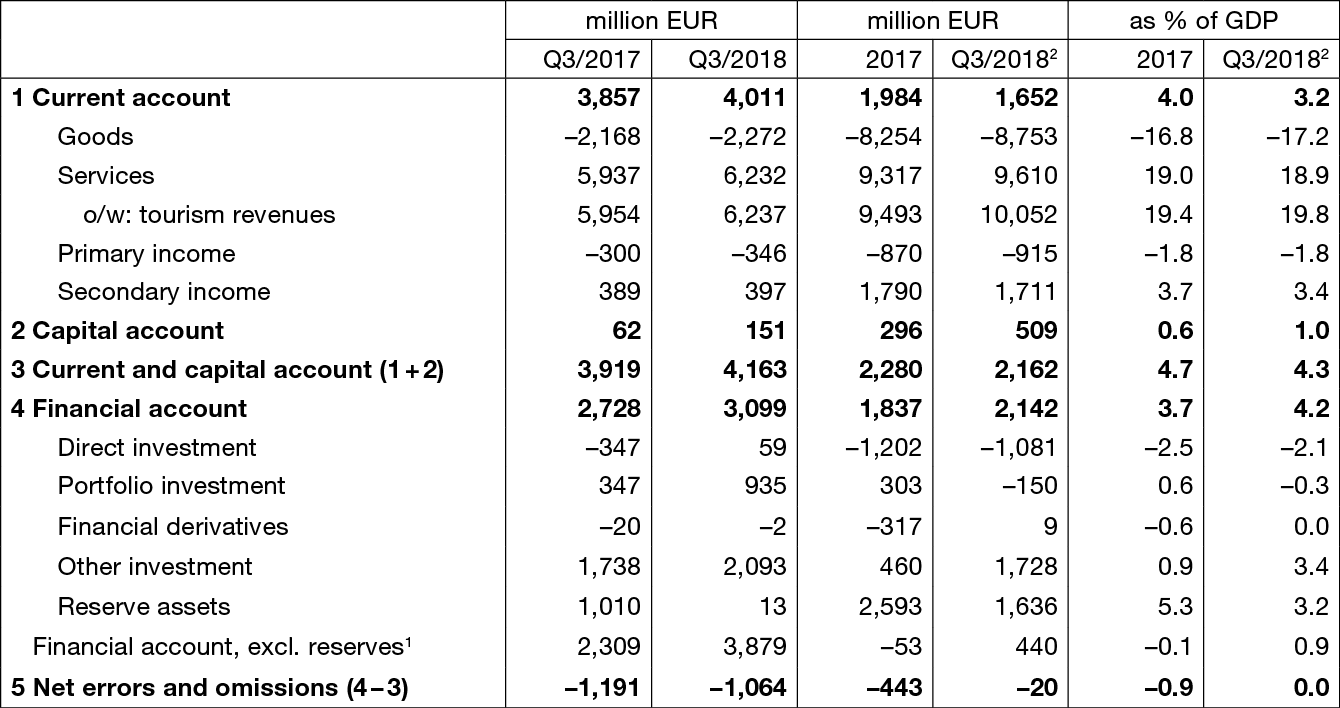 As a result of the developments in the financial account, the net international investment position of the Republic of Croatia improved by EUR 3.1bn in the third quarter of 2018 thanks to improvements seen in the net debt position of domestic sectors, while the net equity position saw no significant change. Overall, the net international investment position stood at EUR –27.1bn at the end of the third quarter of 2018, or –53.3% of GDP (Figure 2). 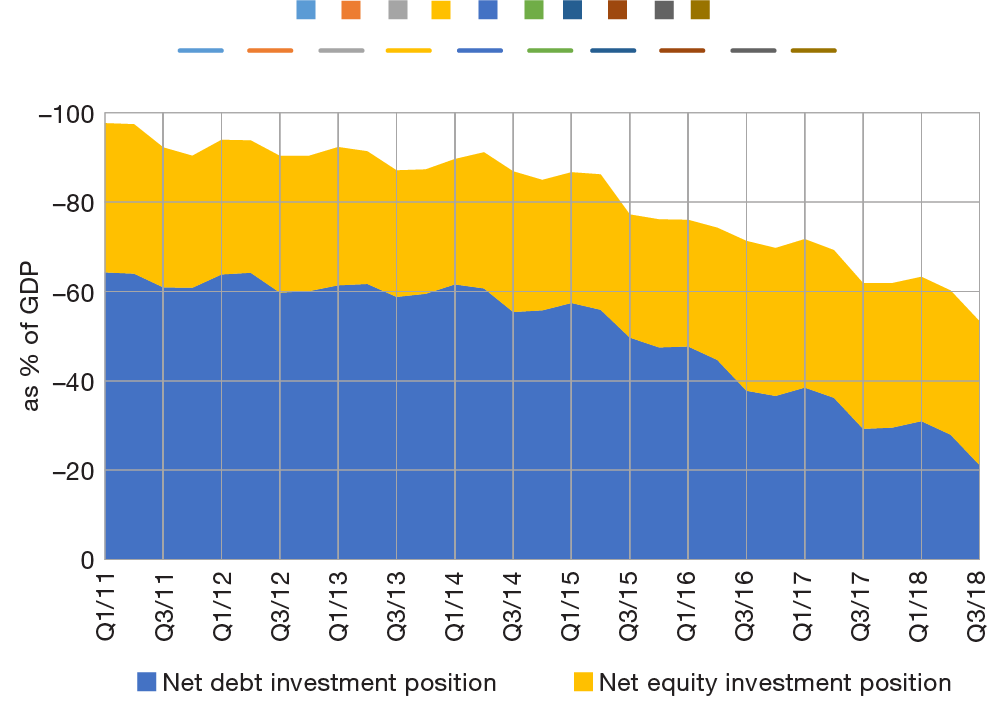