The current and capital account deficit amounted to EUR 0.2bn in the second quarter of 2019[1] in contrast with the surplus of EUR 0.1bn recorded in the same period of the previous year. The deterioration in the balance was mainly due to the widening of the deficit in foreign trade in goods. The deficit in the primary income account also increased. However, unfavourable developments were mitigated by an increase in the surplus in the accounts of secondary income and capital transactions and, to a lesser extent, increased net exports of services. Observing the last four quarters, the current and capital account surplus accounted for 2.3% of GDP at the end of the second quarter of 2019, having gone down by 0.9 percentage points from the entire-2018 level, mainly as a result of deterioration in the balance of foreign trade in goods.

The deterioration of the balance in the primary income account from the same period of the previous year of EUR 0.1bn was mostly driven by higher expenditures on direct equity investments, resulting from better business results of domestic enterprises in foreign ownership. The growth in profit was particularly noticeable in the manufacture of basic pharmaceutical products and financial activity. The increase in the deficit in the primary income account was mitigated by a further trend of increase in revenues from the compensation of residents temporarily employed abroad.

The sum of the balance in the secondary income and capital transaction accounts rose noticeably in the second quarter of 2019 from the same period of the previous year (EUR 0.2bn), mostly as a result of growth in net revenues from transactions with the EU budget. As regards the structure of the increase in the funds allocated from the EU budget, the biggest increase was seen in capital revenues of which a somewhat bigger amount was distributed to the government sector than to other sectors, in particular for investment in traffic infrastructure. Though to a lesser extent, the growth in the secondary income and capital transaction accounts surplus was also fuelled by further growth in net revenues from personal transfers.

The financial account of the balance of payments recorded a net capital outflow of EUR 0.7bn in the second quarter of 2019, an increase of EUR 0.1bn from the same period of the previous year. Net capital outflow would have been lower had it not been for the domestic institutional investors’ subscription of a part of the June issue of a long-term foreign EUR 1.5bn government bond and the purchase of government bonds in the secondary market from foreign investors. As a result of transactions of domestic institutional investors, the total net inflow of capital in the portfolio investment account in the second quarter was lower than the total value of the new bond and stood at EUR 1bn. At the same time, the Ministry of Finance sold to the CNB a part of the foreign funds raised through the issue of a new bond, and deposited a part of these funds with the CNB with the aim of refinancing the dollar bonds maturing in November, thus increasing gross international reserves by EUR 1.5bn. Foreign direct investment account also saw a small outflow of capital of EUR 0.1bn since the growth in assets (mostly based on retained earnings of resident-owned foreign enterprises) was accompanied by a small decline in liabilities (most notably debt instruments). The other investment account saw a net inflow of capital of EUR 0.3bn as a result of a fall in foreign assets and a rise in foreign liabilities, primarily those of the other domestic sectors. 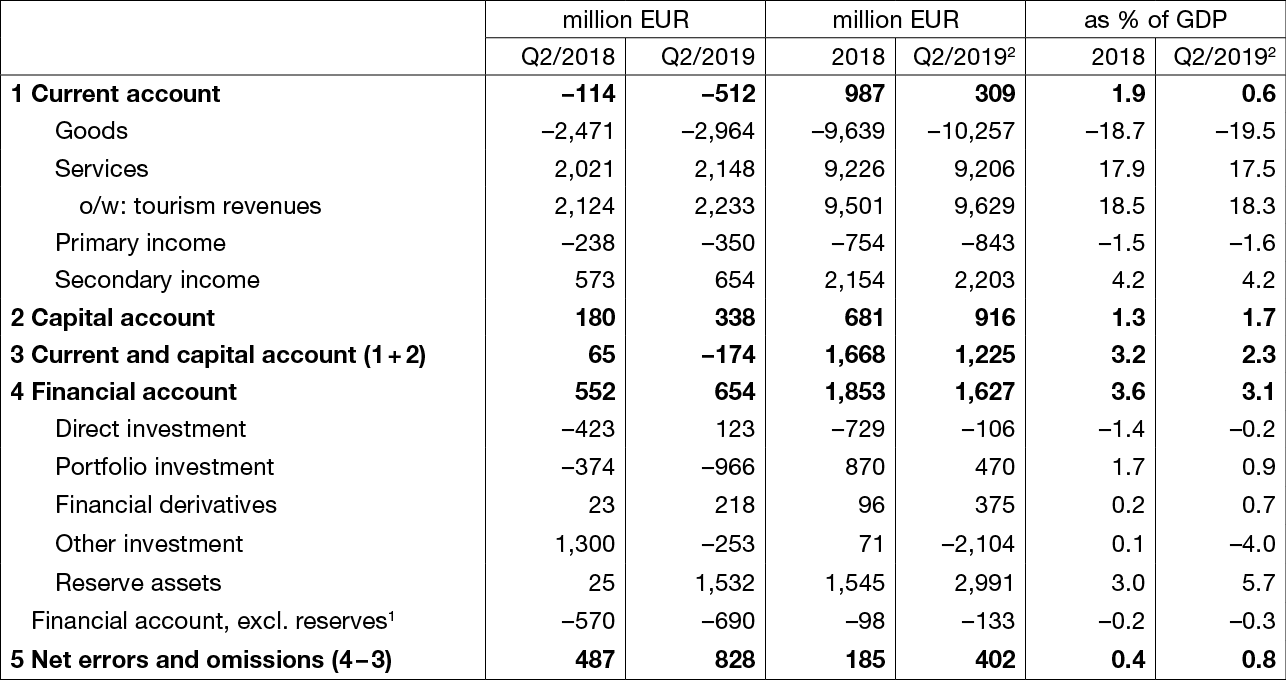 1 Excluding the change in gross international reserves and foreign liabilities of the CNB. Investment of international reserves in reverse repo agreements results in a simultaneous change in CNB assets (recorded in the account of reserve assets) and liabilities (recorded in the account of other investment) and thus has a neutral impact both on changes in the net foreign position of the central bank and the overall financial account balance.
The sum of the last four quarters. 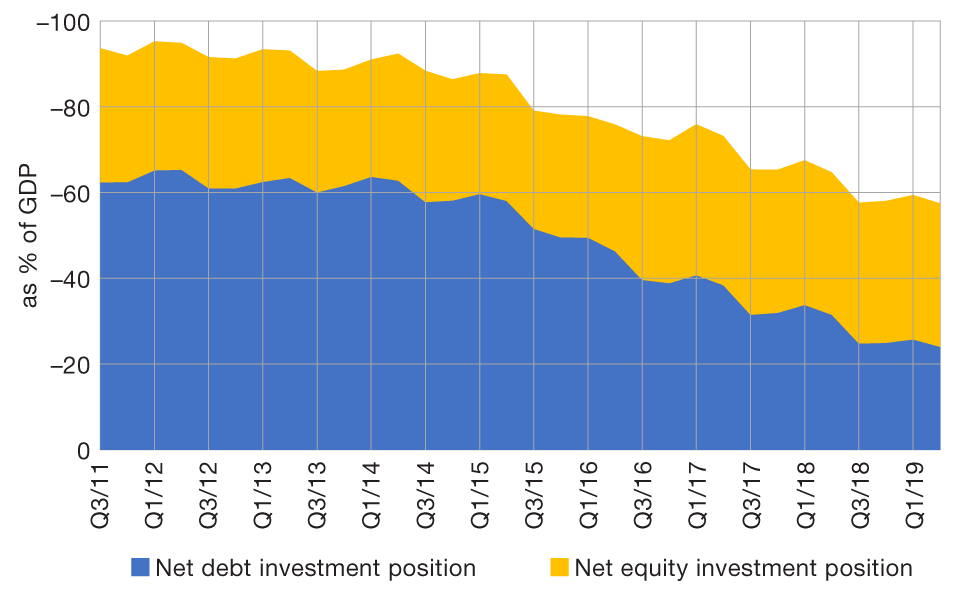 Data on the balance of payments and the international investment position from 2000 onwards have been revised.