The current and capital account of the balance of payments ran a deficit of EUR 1.2bn in the first quarter of 2020, which is an improvement in the balance of EUR 0.6bn from the same period of the previous year. This was almost equally due to the improvement in the balance in the primary income account, increase in net services exports and a growth in total surplus in the secondary income and capital transaction accounts, while the contribution of developments in foreign trade in goods, although also favourable, was somewhat smaller. If the last four quarters are observed, the surplus in the current and capital account stood at 6.0% of GDP, having risen further from the entire 2019 when it stood at 4.8% of GDP.

Even though foreign trade in goods continued to rise in the first two months of 2020, a sharp deterioration in March that followed the outbreak of the coronavirus pandemic and the introduction of epidemiologic measures in Croatia and its major trading partner countries led to a considerable slowdown in the dynamics of foreign trade in goods in the entire quarter. Goods exports thus held steady on an annual level in contrast with the 9.9% increase in the same period of the previous year, while goods imports fell slightly, compared to their 8.0% growth in the same period of the previous year. Such developments led to a small improvement in the balance of foreign trade in goods of EUR 0.1bn.

The net services exports rose considerably in the first quarter of 2020 (EUR 0.2bn) but this was due to a more pronounced fall in imports (22.6%) than exports (6.7%) compared to the same period of the previous year. The increase in net services exports was mostly driven by financial services and travel services, despite a sharp fall of 19.4% in revenues from tourism on an annual level, since the fall in tourist consumption of residents abroad was even bigger and stood at 40.9%.

The improvement in the balance in the primary income account of EUR 0.2bn from the first quarter of 2019 was mostly due to profitability growth of foreign enterprises in domestic ownership, mostly in management activities, and an increase in revenues from the compensation of residents temporarily employed abroad. Expenditures on direct equity investments fell only slightly, with the share of reinvested earnings rising and the share of dividends falling, following the ban on dividend payouts in foreign-owned domestic banks to parent companies abroad.

1The sum of the last four quarters.

The outbreak of the coronavirus pandemic and changes in the expectations regarding economic conditions in the country, particularly as regards the main tourist season, led to increased euorisation of the domestic sectors’ portfolio and resulted in depreciation pressures on the exchange rate of the kuna. To balance the asset side of the balance sheet with the rise in foreign currency liabilities, the banks purchased foreign currency and deposited it abroad, thus contributing the most to a net capital outflow in the other investments account (total EUR 1.8bn). Although to a lesser extent, the net outflow of capital in the other investments account was also due to a fall in CNB liabilities following the closing of a part of repo transactions, even though repo transactions are neutral in terms of their effect on the total financial account[1]. Foreign exchange interventions of the CNB, which stabilised the exchange rate, led to a considerable decline in gross international reserves (EUR 2.1bn) in the first quarter of the year.

The accounts of direct and portfolio investments saw a net capital inflow. The net inflow of capital in the direct investments account of EUR 0.4bn was mostly due to reinvested earnings of domestic banks and enterprises in foreign ownership and somewhat bigger foreign equity investments than in the same period of the previous year, with most of them taking place in real estate activities and trade. The net inflow of capital in the portfolio investment account of EUR 0.3bn was exclusively due to an increase in government foreign liabilities as a result of transactions in the secondary market in foreign government debt, with foreign investors purchasing a part of foreign bonds from domestic institutional investors. In view of the inflows recorded in the accounts of net direct and portfolio investments, the financial account recorded a relatively small capital outflow in the first three months of the year (EUR 0.4bn), if the change in gross international reserves and CNB liabilities are excluded. 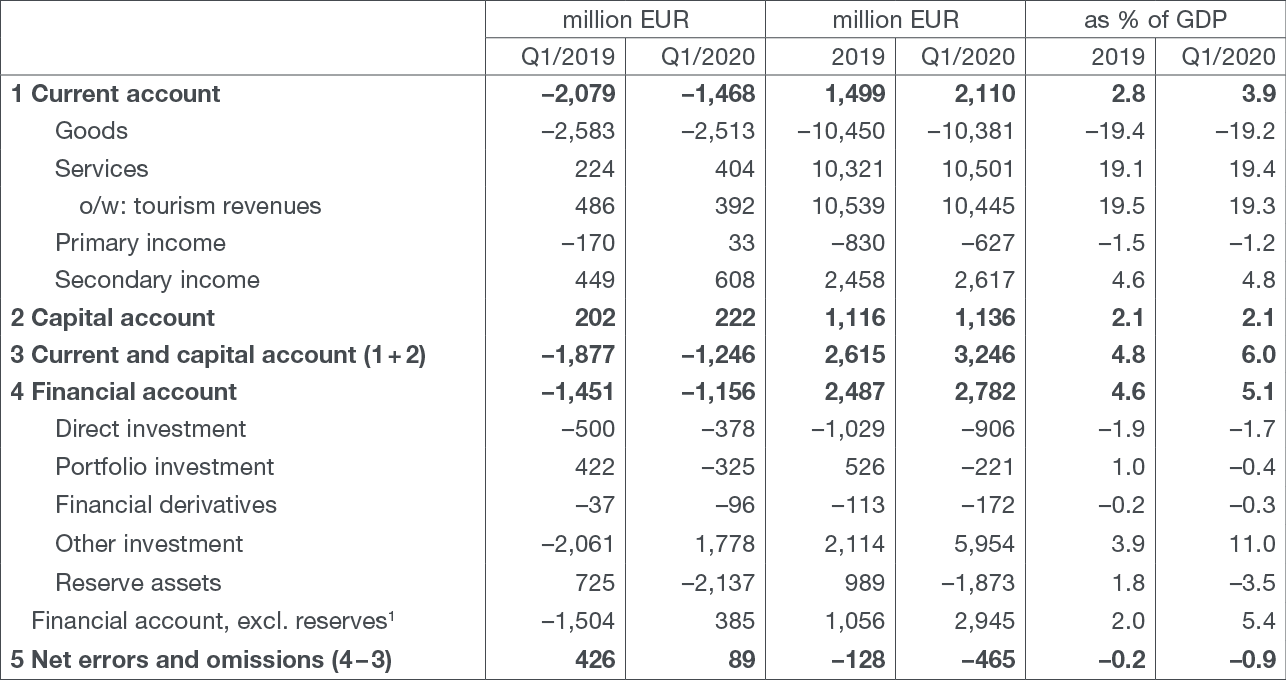 2The sum of the last four quarters.

Despite a net inflow of capital in the financial account, cross-currency and other adjustments led to a small improvement in the net international investment position in the first quarter of 2020. At the end of March 2020, the net international investment position thus stood at EUR –26.5bn or –49.0% of GDP, which is a decrease of EUR 0.4bn or 1.0 percentage point from the end of 2019, or a decrease of 9.9 percentage points from the end of the same period of the previous year (Figure 2).