The current and capital account of the balance of payments ran a deficit of EUR 2.0bn in the first quarter of 2019, which is an increase of EUR 0.2bn from the same period of the previous year. This was mainly due to a noticeable decline in the net exports of services, and to a lesser extent, a widening deficit in foreign trade in goods. However, unfavourable developments were partly mitigated by the narrowing of the deficit in the primary income account and a small increase in the total surplus in the secondary income account and capital account. The last four quarter cumulative current and capital account surplus stood at 3.5% of GDP, a decline from 3.8% of GDP throughout 2018.

In the first three months of 2019, the foreign trade in goods, particularly exports, accelerated. The annual growth rate of exports stood at 9.4%, in contrast with its 1.6% fall in the same period of the previous year. Goods imports grew slightly faster (6.9% versus 6.7% on an annual level). Despite a slower growth of goods imports than exports, the deficit in foreign trade in goods rose by EUR 95m due to a higher imports base. The balance of foreign trade in services also deteriorated notably (by EUR 140m), mostly attributable to a drop in net revenues from travel services and, to a lesser extent, other services. As regards travel services, a sharp rise in tourist consumption of residents abroad (40.1%) was only partly offset by further growth in tourism revenues (5.4%). The deterioration in the other services balance relates, among others, to financial services and advertising and market research services.

The fall in the primary income account deficit from the first quarter of 2018 (EUR 52m) is mainly the result of greater revenues from direct equity investment, i.e. better business performance of foreign enterprises owned by residents, most notably in the research and development activities. At the same time, expenditures on foreign direct equity investments in Croatia, i.e. profits of domestic enterprises owned by non-residents, fell slightly.

The total surplus in the secondary income and capital account was only slightly higher in the first three months of 2019 than in the same period of the previous year. Stronger allocation of EU funds to end beneficiaries was accompanied by a simultaneous rise in payments by Croatia to the EU budget due to an earlier payment of a larger share of the annual obligation. As regards the structure of the use of EU funds, the use of capital funds grew slightly faster than the use of funds for current transfers, while the increase in the total amount of funds used was equally distributed across the government and other sectors.

1 The sum of the last four quarters

The financial account of the balance of payments saw a net capital inflow of EUR 1.4bn in the first three months of 2019, which is almost equal to the level recorded in the same period the year before. Broken down by accounts, the bulk of the net inflow came from the account of other investment and, to a lesser extent, account of direct investment, while the account of portfolio investment saw a net capital outflow. Gross international reserves also rose considerably (EUR 0.7bn), though this is mainly the result of investment of a part of reserves in repo agreements[1]. However, if the change in gross international reserves and liabilities of the CNB is excluded, the net capital inflow (EUR 1.4bn) was smaller than in the same period of the previous year (EUR 1.8bn).

A large net inflow of capital in the account of other investment (EUR 2.1bn) can largely be attributed to a decline in the foreign assets of banks and a big increase in the central bank’s liabilities due to the investment of international reserves in repo agreements. The net capital inflow in the account of direct investment (EUR 0.3bn) was mainly the result of a rise in the short-term liabilities of domestic enterprises to foreign owners (for dividends to be paid out based on enterprises' general meeting decisions) and equity investment in Croatia. The inflow of equity investment in Croatia was mostly driven by investment in real estate, accommodation and construction activities.

The net outflow of capital in the portfolio investment account (EUR 0.3bn) was the result of transactions in the secondary market of external government debt, with the domestic institutional investors purchasing a part of government bonds from foreign investors, and, to a lesser extent, a rise in bank investment in foreign debt securities. 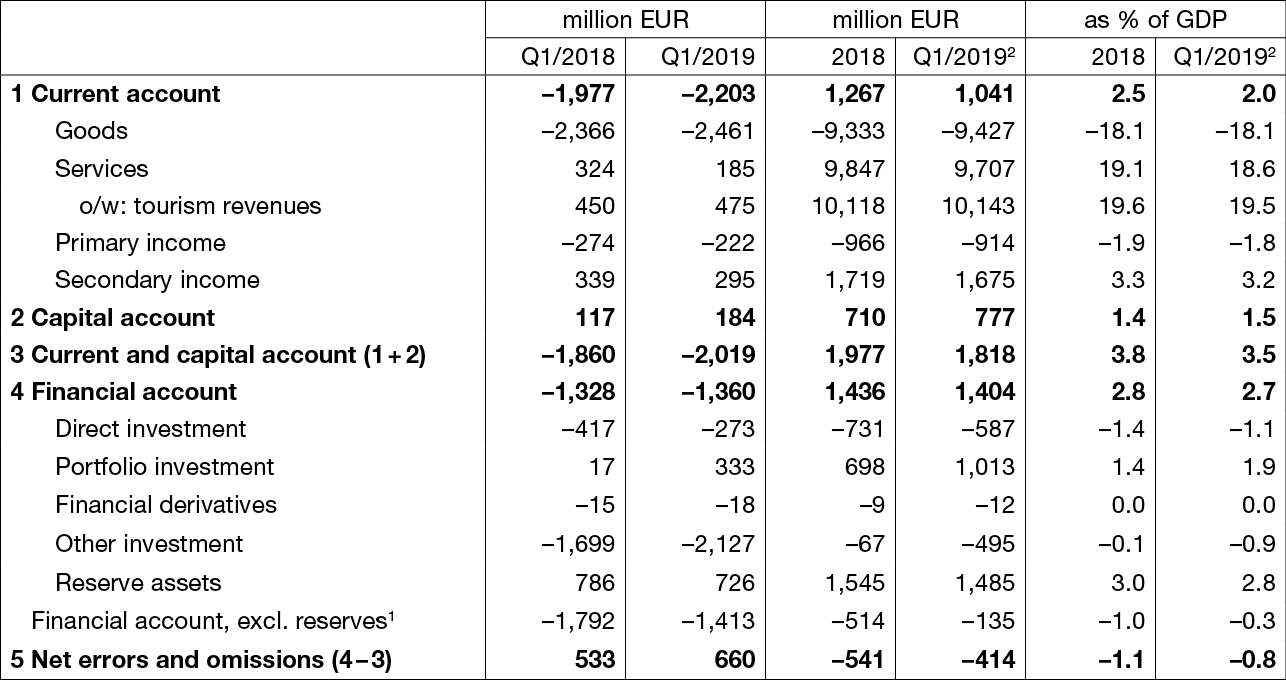 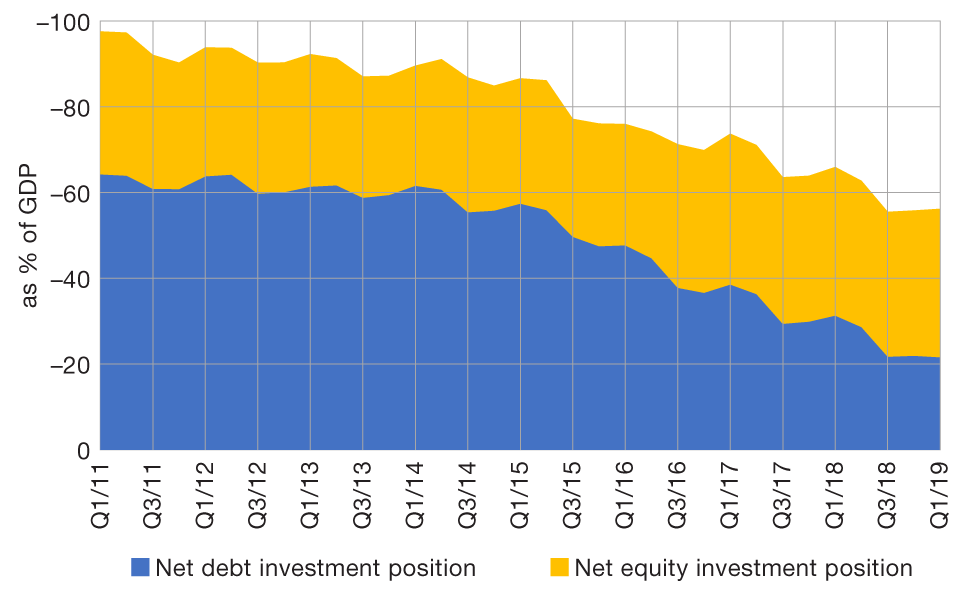 Data on the balance of payments and the international investment position are revised in accordance with the commonly used practice, based on subsequently available data. Compared to data released at the end of March 2019, this release revises the balance of payments data for the period from early 2015 to end-2018. This is mostly due to revised financial statements of the reporting entities and the ensuing decrease in retained earnings on the revenue and expenditure side of the primary income account, i.e. retained earnings on the assets and liabilities side of the account of direct investment. If all balance of payments data revisions are taken into account, the surplus in the current account of the balance of payments was bigger by EUR 46m in 2015 compared to the previously released data and smaller by EUR 33m, EUR 95m and EUR 87m, respectively, in the following three years. The values of assets and liabilities based on equity investments in international investment position were also revised.

Investment of a part of international reserves in reverse repo agreements results in a simultaneous change in assets (recorded in the account of reserve assets) and liabilities (recorded in the account of other investment) of the CNB and thus has a neutral impact both on changes in the net foreign position of the central bank and the overall financial account balance. ↑