Comments on monetary developments for March 2021

Total liquid assets (M4[1]) increased by HRK 2.2bn or 0.6% (based on transactions) from February to March 2021, ending the month at HRK 368.9bn (Table 1), due to the parallel sharp increase in net foreign assets (NFA) and a decrease in net domestic assets (NDA) in the summary consolidated balance sheet assets. NFA and NDA developments reflect the inflow of the proceeds from the eurobond issue[2] to central government accounts with the CNB, with about half of that amount being used by the government for the repayment of 10-year USD bonds that had fallen due. The annual increase in M4 slowed down from 8.6% in February to 7.4% in March due to the base effect, that is, the much stronger growth in foreign currency deposits in the same period of 2020. The rise in foreign currency deposits at the onset of the pandemic was a reflection of withdrawals from investment funds, i.e., the transfers from investment funds to banks. As regards the components of total liquid assets, money (M1[3]) grew by HRK 1.5bn (0.9%) from the month before, with its annual increase picking up from 18.0% in February to 18.4% in March (Figure 1), whereas quasi-money rose on a monthly basis, by HRK 0.7bn (0.4%), but decreased annually by 0.1% (after growing by 2.0% in February).

Total placements of monetary institutions to domestic sectors (excluding the central government) stood at HRK 241.2bn at the end of March, up HRK 1.4bn or 0.6% (based on transactions) from the end of the previous month. On an annual level, the growth in total placements slowed down from 3.0% to 2.3% (Figure 2). Total loans, which account for the largest share of total placements, grew by HRK 1.5bn (0.6%) on a monthly level as a result of the increase in loans to other financial institutions and households (of HRK 0.8bn and HRK 0.7bn respectively) and the decrease in loans to corporates (of HRK 0.1bn) (Table 2). The rise in household loans was driven by the growth in housing loans (of HRK 0.3bn or 0.5%) as well as general-purpose cash loans, which registered a mild growth for the second consecutive month (of HRK 0.3bn or 0.6%) after several months of contraction. The increase in housing loans picked up from 8.7% to 8.9% on an annual level, whereas the fall in general-purpose cash loans moderated from −3.0% to −2.5%. As a result of the sharp increase in corporate loans in March 2020 (the base effect), the growth in corporate loans slowed down on an annual level, from 4.4% to 1.2%. 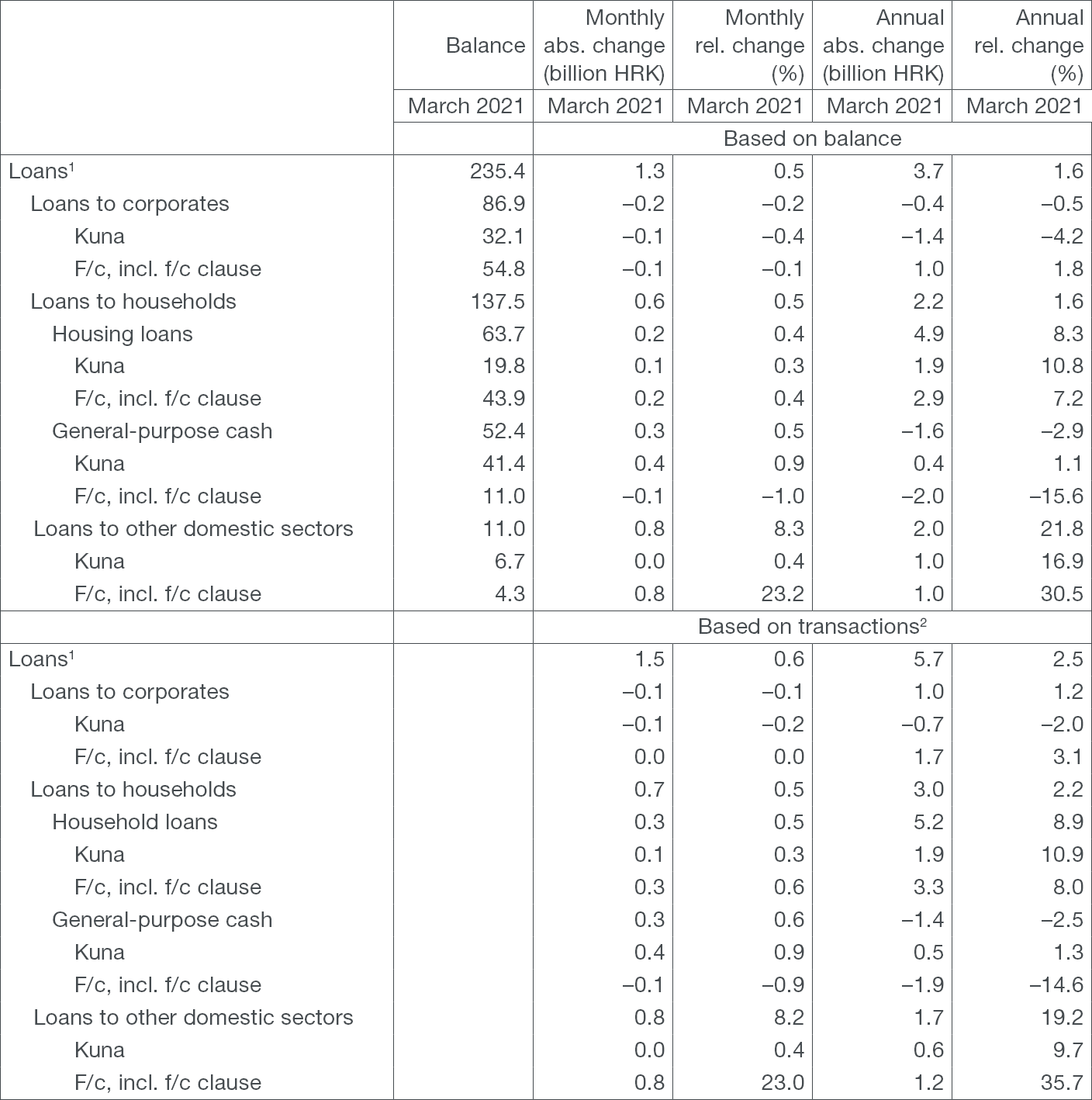 1In addition to loans to households and corporates, they also include loans to the local government and other financial institutions.
2 The transactions show changes that exclude the effects of exchange rate changes, securities price adjustments, reclassification and write-off of loans, including the sale of loans in the amount of their value adjustment.
Source: CNB. 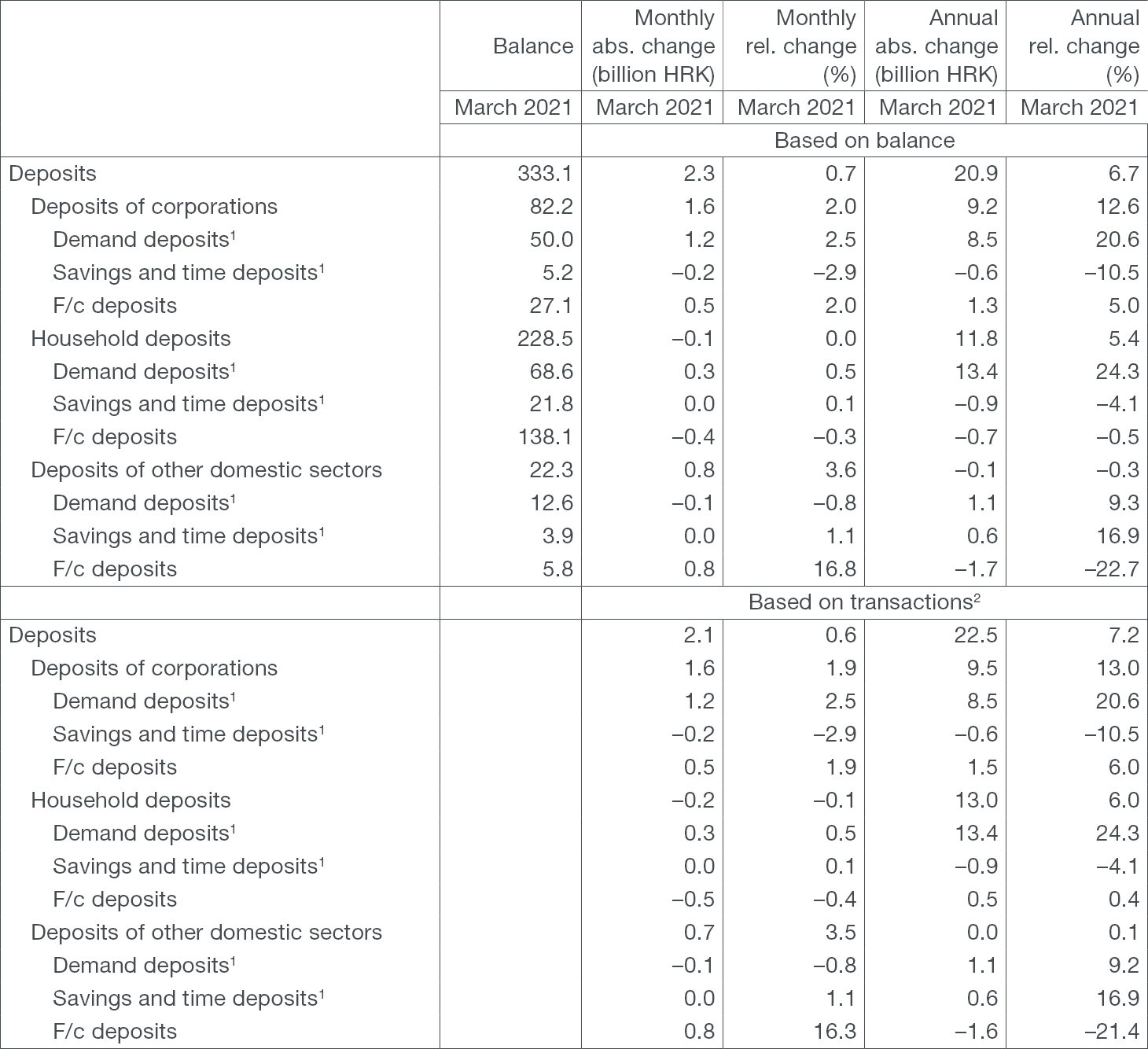 1 Includes only kuna sources of funds of credit institutions.
2 The transactions show changes that exclude the effects of exchange rate changes, securities price adjustments, reclassification and write-off of loans, including the sale of loans in the amount of their value adjustment.
Source: CNB.

For detailed information on monetary statistics as at March 2021, see: