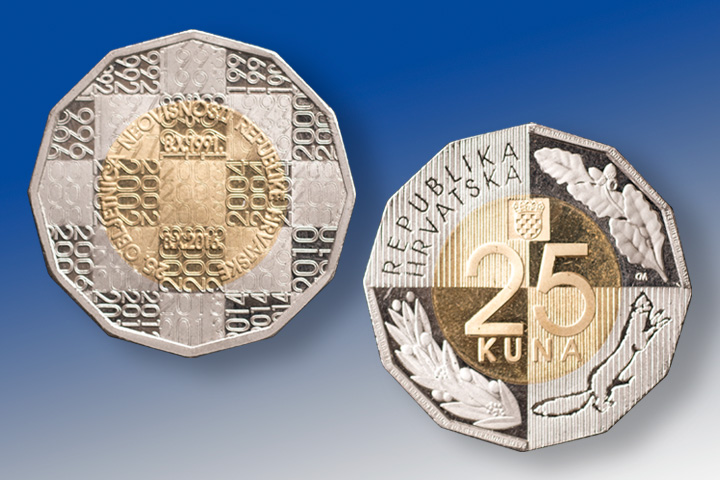 The Croatian National Bank will on 7 October 2016 issue a new 25 kuna commemorative circulation coin marking the 25th anniversary of independence of the Republic of Croatia, 8 October 1991 – 8 October 2016. The Commission for the Preparation of Proposals for the Design and Issue of Banknotes and Coins of the Republic of Croatia, at the session held on 1 September 2016, selected trial strike number 1 as the best 25 kuna coin design proposal.

The Commission's decision took into account the results of a survey asking the public to choose the best trial strike: 50% of survey participants opted for trial strike number 1, 28% opted for number 2 and 22% for number 3. The three trial strikes for the new 25 kuna coin were produced by the Croatian Mint, based on the design by the sculptor Damir Mataušić. In an effort to include the general public in the selection of the best trial strike for the new 25 kuna coin, the CNB on 21 July published a survey on its website, inviting all interested to participate and, based on their own criteria, choose the best trial strike. A total of 10,188 persons (approximately 0.24% of the total number of inhabitants of the Republic of Croatia) took part in the survey in the period until 20 August 2016. Given that about 100,000 persons (around 0.03% of the EU inhabitants) in 2015 responded to the ECB's survey on the design of a commemorative euro coin to celebrate 30 years of the EU flag, the response to the CNB survey can be considered as very high. Almost 9% of survey participants indicated that they were pleasantly surprised at the inclusion of the general public in the selection of the coin motifs. In addition to the inhabitants of the Republic of Croatia, Croatian citizens living abroad and tourists on holiday in Croatia while the survey was conducted also participated in the survey. Survey participants were of all age groups.

The new 25 kuna circulation coin, minted by the Croatian Mint, will be issued in the amount of 50,000 and will be available for purchase at the Croatian National Bank.

The Croatian National Bank has released 11 issues of 25 kuna coins, which have a numismatic value and, as commemorative circulation coins, can also be used as the means of payment.