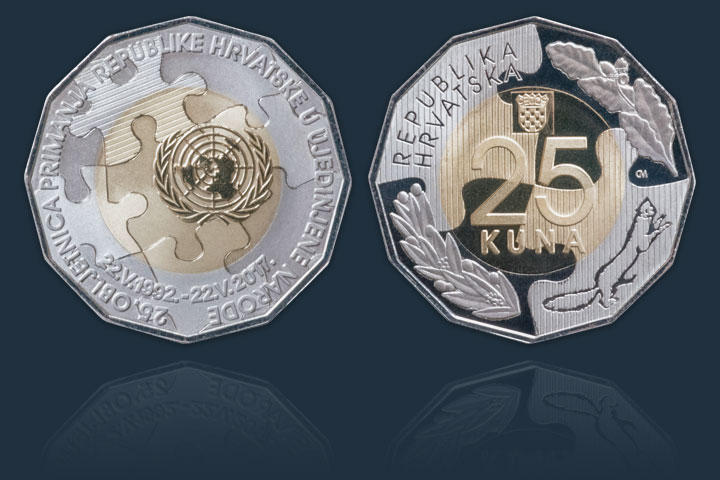 In order to mark the 25th anniversary of the admission of the Republic of Croatia to membership in the United Nations (22 May 1992 – 22 May 2017), the CNB will on 22 May issue into circulation a new 25 kuna commemorative circulation coin. The coin, designed by the sculptor Damir Mataušić and minted by the Croatian Mint, will be issued in the amount of 20,000.

The main motif on the obverse and the reverse of the new 25 kuna coin depicts a jigsaw puzzle. The design on the obverse symbolises the cooperation and unity of the Member States of the United Nations. The jigsaw piece crossed with thin diagonal lines represents "H", the first letter of the Croatian name for Croatia – "Hrvatska". The letter "H" touches the logo of the United Nations in the coin's core, in a symbolic representation of the membership of the Republic of Croatia in the United Nations. The jigsaw puzzle motif on the reverse signifies the fields of the state coat of arms.

The Croatian National Bank has released 12 issues of 25 kuna commemorative circulation coins, which, in addition to having a numismatic value, can also be used as means of payment.

In order to make the new commemorative circulation coin as accessible to the interested public as possible, the CNB has invited banks to obtain this and the previous issues of the 25 kuna coin by the usual process through CNB's cash supply centres in Osijek, Rijeka, Split and Zagreb. The new coin will be available for purchase as of 22 May 2017 at the CNB's cash desk and in banks' branch offices.