Banking union – the state of play and challenges ahead 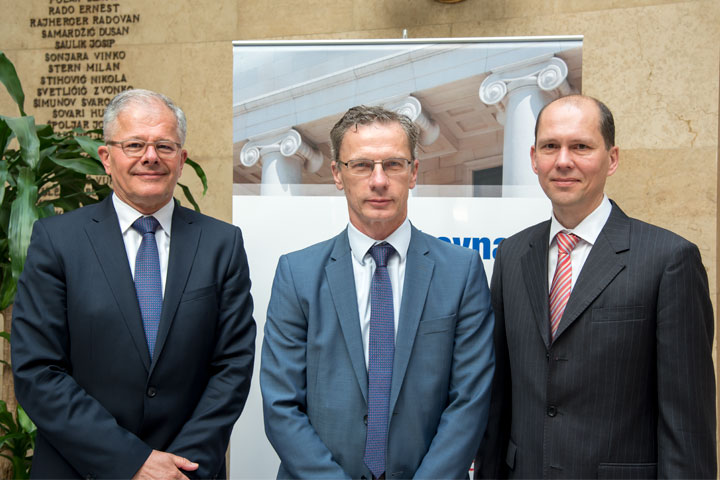 The expert conference "Banking Union: the State of Play and Challenges Ahead", held at the Croatian National Bank on 18 May 2016, gathered the representatives of the European Commission, the Croatian National Bank and the financial and banking sectors to discuss the achievements made and further action to be taken towards the establishment of a fully-fledged banking union

The banking union was launched through a series of initiatives aimed at reducing risks to financial stability and facilitating risk insurance among member states in order to strengthen the institutional framework of the euro area. It aims to increase banks' resilience to financial crises, prevent situations where taxpayers' money is used to bail out banks and reduce market fragmentation by harmonising financial sector rules and improving supervision of the EU's financial system. The banking union has three pillars: the Single Supervisory Mechanism (SSM), with responsibility for supervision exercised by the ECB in close cooperation with national supervisory authorities, the Single Resolution Mechanism (SRM) and the European Deposit Insurance Scheme (EDIS). It was created in response to the global financial crisis to increase the confidence of financial market participants in member states and their financial systems. Nine non-euro area member states, including Croatia, have not yet joined the banking union. These states apply uniform rules on banking supervision and resolution, but do not participate in the single supervisory and resolution mechanisms. The application of these rules was a topic of discussion among the representatives of the Croatian National Bank, the European Commission and domestic experts participating in the conference "Banking Union – the State of Play and Challenges Ahead", held at the Croatian National Bank on 18 May 2016. Also discussed were arguments in favour of either staying out of a close cooperation mechanism or entering into a close cooperation and thus joining the banking union before the introduction of the euro.

As the Vice-President of the European Commission for the Euro and Social Dialogue, Valdis Dombrovskis, has noted: "It is of vital importance to conduct open and transparent consultations on the future of the Economic and Monetary Union with a wide range of stakeholders in member states, such as Croatia. Incredible progress has been made on the banking union in a very short time, but we must ensure that it continues. We must complete the banking union with a single deposit insurance scheme, a common backstop mechanism and further risk reducing measures. In this context, it is essential to break the sovereign bank nexus to avoid taxpayers having to pay for the mistakes of banks."

Opinions were also expressed that the decision to enter into a close cooperation may be postponed due to the lack of experience with functioning in a new regulatory environment with many unknowns. On the other hand, states that have not been members of the banking union since its inception have no influence either on the drafting of part of the regulations or on the establishment of the practice and will therefore be faced with ready-made solutions once they join the union.

As stated by the Croatian National Bank Governor, Boris Vujčić: "Joining the banking union is the only feasible option for any member state planning to introduce the euro, so that Croatia can also be considered as its future member. However, in the period before entering the union, we have to protect our specific interests in the given environment."

Croatia's has had a good and promising cooperation with the SSM, which is expected to ensure a smooth transition to this mechanism in due course. The experience of cooperation within the SRM is, obviously, limited, given the fact that this mechanism was launched only recently. The bank recovery and resolution framework was introduced in the Croatian legislation in February 2015 by the Act on the Resolution of Credit Institutions and Investment Firms. The third pillar, the European Deposit Insurance Scheme, is still being debated. With negotiations on the completion of the banking union still underway, the decision to enter into a close cooperation before the introduction of the euro will hinge on the weight assigned to the equal treatment of member states, irrespective of their euro area membership, in the negotiation process.

Background The banking union is an EU-level banking supervision and resolution system, aiming to encompass deposit insurance, which operates on the basis of EU-wide rules. It aims to ensure that the banking sector in the euro area and the wider EU is safe and stable and that potential disturbances in the financial sector have a minimal impact on the real economy and member states, including the resolution of non-viable banks without recourse to taxpayers' money. The banking union members are all euro area countries and those EU member states that choose to participate. The non-euro area member states can join the banking union by establishing a close cooperation agreement. The banking union is comprised of the single rulebook, the Single Supervisory Mechanism and the Single Resolution Mechanism. The Single Supervisory Mechanism has been fully operational since November 2014 and the Single Resolution Mechanism since January 2016. On 24 November 2015, the European Commission proposed a euro area wide deposit insurance scheme (EDIS) as the last element of the banking union.

The CNB Vicegovernor, Vedran Šošić, gave a presentation at the conference on the banking union from the perspective of a non-euro area member state.

The Chief Economic Analyst of the European Commission, Phillip Rother, held a lecture "Banking Union: the State of Play and Challenges Ahead".