In mid-2017, the Croatian National Bank carried out the first Household Finance and Consumption Survey (HFCS). The sample of households in Croatia[1] contained detailed data on the real and financial assets of households, their liabilities, incomes and consumption as well as various sociodemographic characteristics. Before this survey, the assets of Croatian households could be analysed only on the basis of aggregate data sources, such as financial accounts containing data on total financial assets and liabilities, while there was no adequate source for the analysis of household real assets. In addition, the available aggregate sources of data did not contain information on the distribution of assets and liabilities among households and underlying inequalities. Household inequality in Croatia used to be analysed relying exclusively on household income data.[2]

This paper uses the results of the survey to describe the main types of real and financial assets and to analyse total household net assets and their distribution. Moreover, a generalized ordered probit model is used in order to detect the main drivers of household position in net wealth distribution.

The main results show there is moderate inequality in net wealth distribution among households in Croatia. Real assets are widely spread across households with 85% of the households owning the household main residence (HMR), with a median value of 66 thousand euro (Table 1). On the other hand, financial assets and liabilities are concentrated among wealthier households. 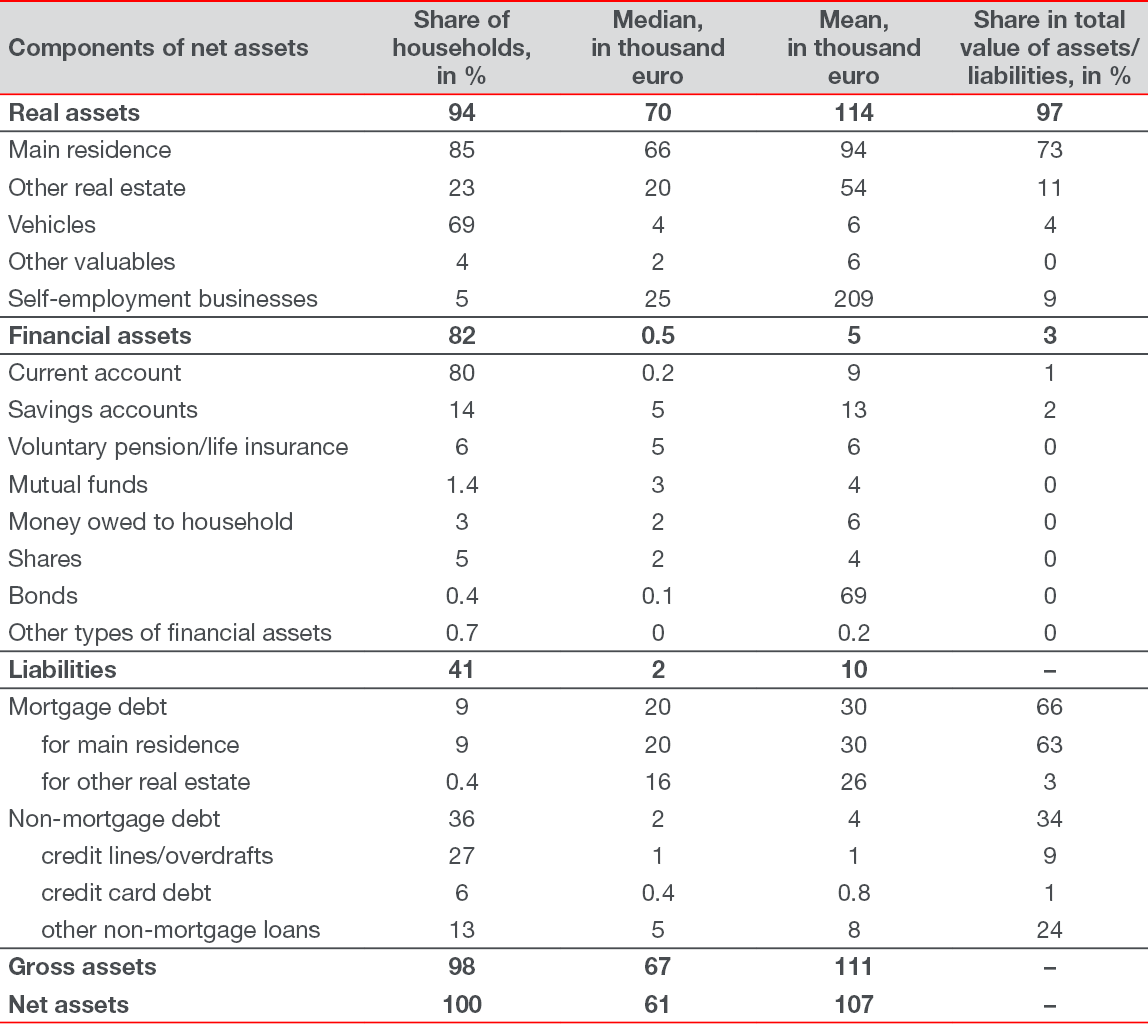 Notes: Gross assets are calculated as the sum of real and financial assets. Net assets equal the amount of gross assets net of household liabilities. The survey has been harmonised among EU member states and its values are expressed in euro.

The analysis of the main determinants of household position in the wealth distribution additionally highlighted the importance of the HMR. Households owning the HMR, independently of the exact way of its acquisition, are less likely to be in the lowest quintile group according to the net wealth value, while households with the HMR located in the city of Zagreb or Adriatic municipalities have a higher probability of being in higher quintile groups according to the net wealth value. The level of income, education, labour market status and age group of the household reference person are also important determinants of household position in net wealth distribution, where households with more educated, older and self-employed reference persons have a higher probability to be among wealthier households.

[1] The Household Finance and Consumption Survey was conducted in coordination with the European Central Bank. The European Central Bank had already coordinated two HFCS waves in some EU member states, the first one in the period from 2008 to 2010 and the second one in 2013. As Croatia joined the EU in July 2013, the Croatian National Bank (CNB) joined the third wave of the survey, in 2017, when data on net household assets for 2016 were collected. The survey was carried out in cooperation with Ipsos agency and the Croatian Bureau of Statistics (CBS) on a gross sample of 4 070 households. The realized sample comprised 1,357 households, which means that the response rate was 33%. Jemrić I. (forthcoming) Household Finance and Consumption Survey provides a detailed sampling procedure, a description of the survey, a summary overview of the main results and their comparison with the results of the previous waves of the survey.