SEPA project in the European Union

A representative of the Republic of Croatia, nominated by the Croatian Bank Association, also participates in the work of the European Payments Council.

As the European Payments Council comprises only the representatives of the supply side of the payment service market, the European Commission and the European Central Bank have set up the SEPA Council thereby including the demand side of the payment service market in the SEPA project management. Pursuant to a decision of the European Central Bank, the SEPA Council was replaced by the Euro Retail Payments Board in December 2013, with the participation from the representatives of the payment service supply side (banking communities, payment institutions and electronic money institutions), demand side (the representatives of consumers, retailers, corporations, small and medium-sized enterprises and public administration bodies) and central banks.
The SEPA migration is carried out in every member state as part of the national projects for the implementation of SEPA standards.

SEPA project in the Republic of Croatia

The national SEPA project was launched in April 2013 upon the initiative of the National Payment System Committee (NPSC)[1], an interinstitutional body providing support to the functioning of the payment system in the Republic of Croatia.

At the 20th NPSC meeting it was decided that the SEPA project in the Republic of Croatia would be managed by the National Payment System Committee, which coordinates, channels and monitors the activities of working groups, discusses open issues and compiles reports on the course of the project.

The SEPA working bodies in the Republic of Croatia are the Croatian SEPA Coordination Committee (CSCC) and the Croatian SEPA Forum (CSF). These bodies are independent in the performance of their tasks and report to the National Payment System Committee on completed activities. With regard to the scope of their tasks, if necessary, the working bodies can set up special working groups.

After preparing and adopting the national schemes for the execution of payment transactions of credit transfers and direct debits, i.e. the Rules of the HRK SCT scheme, Core HRK SDD scheme and B2B HRK SDD scheme, the CSCC has concluded that it is necessary to set up a special body that would be charged with the management of the schemes.
At its 24th meeting held on 18 May 2015, the National Payment System Committee adopted the decision to set up the National Scheme Management Board (NSMB).

With the setting up of the NSMB, the need for the operation of the CSCC has ceased, and the NSMB took over the role in the further management of national SEPA schemes, as well as the task of a further development of the SEPA project in the Republic of Croatia.

Organisational structure of the SEPA project in the Republic of Croatia 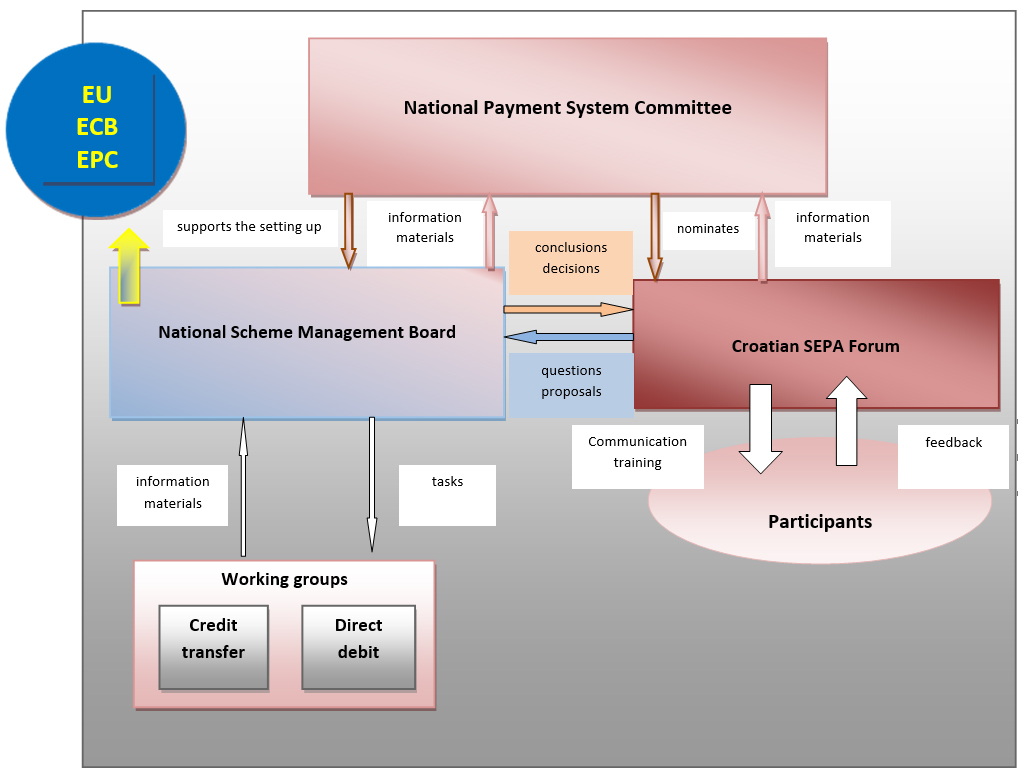 In order to achieve the SEPA goals, new payment instruments were developed, the SEPA Credit Transfer and the SEPA Direct Debit, which are used for euro payments throughout the SEPA area.

SEPA payment instruments are used in line with SEPA payment schemes, consisting of a common set of rules, practices and standards agreed on an interbank level. These schemes are defined by SEPA Rulebooks, i.e., the SEPA Credit Transfer Rulebook and the SEPA Direct Debit Rulebook. The rules and standards described in the Rulebooks are obligatory for payment service providers that adhered to SEPA schemes. The same set of SEPA payment instruments and uniform rules for SEPA schemes enable payment service users to execute cashless payment transactions in euro in the same manner and under the same conditions throughout the SEPA area.

Direct debit
Direct debit means a national or cross-border payment service for debiting a payer’s payment account, where a payment transaction is initiated by the payee on the basis of the payer’s consent.

Payment cards
A payment card means a payment instrument enabling its holder to make payments for goods and services either at an acquiring terminal or remotely, and/or cash withdrawal and/or other services at an ATM or another self-service device.

In order to implement the Croatian SEPA project on time and within the deadlines set forth in Regulation (EU) No 260/2012 and inform all SEPA project participants affected by changes in the area of payment operations, the National Payment System Committee adopted the National SEPA Migration Plan. The document comprises a detailed description of the activity plan and the course of migration within the defined deadlines.

In accordance with the accepted changes, in January 2017, the National Migration Plan – Annex 2 was prepared, changing the date for the beginning of implementation of the HRK SDD Core Scheme Rules and the HRK SDD B2B Scheme Rules.

In the meantime, the NSMB proposed a different model of migration of the existing direct debits to SEPA direct debits, which includes minor changes in migration dates.

At its 28th meeting, held on 3 May 2017, the NPSC accepted the NSMB's proposal and, accordingly, the National SEPA Migration Plan was updated and Annex 3 was prepared.

The SEPA legal framework consists of the following regulations:

Regulation (EC) No 924/2009 of the European Parliament and of the Council of 16 September 2009 on cross-border payments in the Community and repealing Regulation (EC) No 2560/2001 prescribes that charges for cross-border payments in euro (payments between payment service providers located in different EU member states, including Norway, Iceland and Lichtenstein) must be on the same footing as charges for corresponding national payments (payments between payment service providers within the same member state) in the same currency.

Regulation (EC) No 924/2009 also prescribes standardisation for the purpose of simplifying the execution of cross-border payments, i.e. the use of the International Bank Account Number (IBAN) and the Bank Identifier Code (BIC).

Member states that have not introduced the euro, including the Republic of Croatia, are obliged to fulfil SEPA requirements prescribed by the said Regulation at the latest until 31 October 2016.

With the aim of implementing Regulation (EC) No 924/2009 and Regulation (EU) 260/2012, in the segment defining the authorities competent for exercising supervision and dealing with complaints, regulating out-of-court complaints and redress procedures and defining infringements of regulations, the Republic of Croatia adopted the Act on the Implementation of EU Regulations Governing Payment Systems (OG 54/2013) in 2013.

Since in the meantime Regulation (EU) No 2015/751 on interchange fees for card-based payment transactions was adopted, the new Act on the Implementation of EU Regulations Governing Payment Systems (OG 50/2016) was prepared, governing the subject areas (supervision, dealing with complaints, out-of-court complaint procedures and redress procedures and infringements) for all of the above EU regulations governing payment systems.

Regulation (EC) No 1781/2006 of the European Parliament and of the Council of 15 November 2006 on information on the payer accompanying transfers of funds imposes the obligation on payment service providers to have transfers of funds accompanied by accurate and meaningful information on the payer so that it is always possible to trace the transfer of funds back to the payer himself, regarding activities related to the prevention, investigation and detection of money laundering and terrorist financing.

SEPA infrastructure for the clearing and settlement of payment transactions

Specifically, the SEPA infrastructure for the clearing and settlement of payment transactions must be capable of processing SEPA euro payments made between all SEPA scheme participants. The reachability of all SEPA scheme participants, irrespective of in which country of the SEPA area they are located, can be ensured by establishing technical interoperability of payment infrastructures.

According to the National SEPA Migration Plan, a single national payment infrastructure for the clearing of national and cross-border SEPA credit transfers in euro will be set up in the Republic of Croatia, in line with the agreement with the Croatian banking community.

The EuroNCS payment system became operational on 6 June 2016. It is a new payment system in the Republic of Croatia that executes the clearing of euro payment transactions implemented according to the rules of the SEPA Credit Transfer (SCT) scheme for credit transfers of the European Payments Council.

In addition, for the purpose of maintaining euro accounts of banks, the Croatian National Bank has set up the TARGET2 HR national component of the payment system to settle the clearing of national and cross-border payment transactions in euro. TARGET2 (the Trans-European Automated Real-time Gross settlement Express Transfer system) is a centralised large-value payment system in euro, which is supervised by the European Central Bank.

The TARGET2-HR national component, in which the settlement of the clearing in EuroNCS is executed, started production operations on 1 February 2016, in accordance with the National SEPA Migration Plan.
For more information on the TARGET2 payment system see the website of the Croatian National Bank.

In addition, with regard to the EuroNCS system becoming operational, on 6 June 2016, the National Clearing System (NCS), a payment system for the clearing of payment transactions in kuna, launched the clearing of payment transactions according to the Rules of the HRK SCT scheme. Previously, all banks accepted the above scheme as a single set of rules for the execution of credit transfers in the Republic of Croatia.

All information related to the SEPA project in the Republic of Croatia is available at the official website of the Croatian SEPA project.

The European Central Bank has published an informative video on the SEPA.