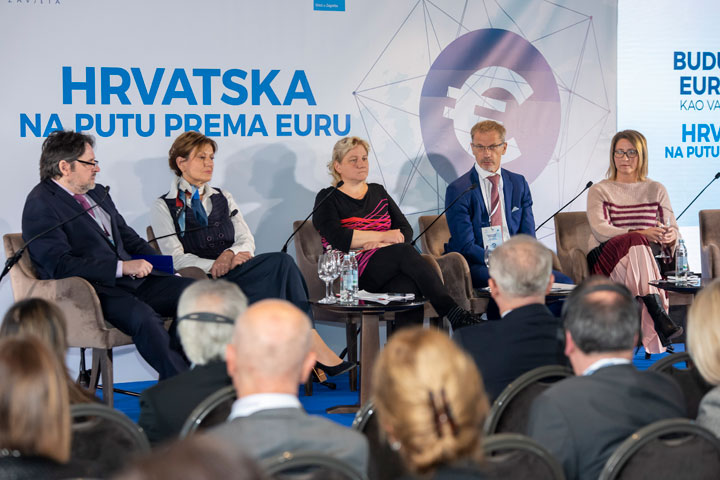 CNB Governor Boris Vujčić participated in the conference Future of the Eurozone as a Currency Union: Croatia on Its Path to the Euro. In response to a panel question about Croatia’s joining the EU's Exchange Rate Mechanism (ERM II) Governor Vujčić said that, in view of considerable taxpayers’ funds most eurozone countries spent on bank recapitalisation during the recent global financial crisis, the rationale behind setting up the banking union was to as much as possible protect taxpayers – within the EU bank supervision and rehabilitation system – from banks’ poor business policies.

As Governor Vujčić explained, the banking union rests on three pillars. The first pillar is the Single Supervisory Mechanism (SSM), which applies to banks in the euro area and can be joined by EU member states before their entry to the euro area. The supervision over systemically important banks in the SSM is conducted by the ECB in cooperation with national central banks. The second pillar is the Single Resolution Mechanism (SRM), which enables the resolution of systemically important banks from a single fund, with an aim to offset differences in laws and practice between member states by distributing risk and enhancing neutrality and equality in the treatment of banks. The third pillar is the European Deposit Insurance Scheme (EDIS), which is, if not yet fully operational, crucial for the realisation of the banking union.

Croatia’s entry to the banking union is a precondition for its joining the ERM II. The single bank supervision system should not pose a great challenge for Croatia due to the stability of its banking system, which is better capitalised than that of the euro area. When Croatia joins the banking union, I will personally make an effort to extend the competences of supervisors and the ECB in the Single Supervisory Mechanism, said the Governor.

Governor Vujčić is of the opinion that macroprudential measures can be the most efficient in the area of real estate loans, as they can provide for determining the available amount of the loan granted in relation to the value of the house/flat or the client’s income – which was the subject of a CNB’s recommendation.

They can also be utilised to combat excessive real estate price growth, but even their efficiency wanes in a prolonged period of very accommodative monetary policy, as evident now when the monetary policy stance is very expansive, with negative ECB's interest rates, concluded the Governor.

The conference Future of the Eurozone as a Currency Union: Croatia on Its Path to the Euro was organised on 22 November 2019 in Zagreb by the Croatian Statehood Foundation, Wilfred Martens Centre for European Studies and the Hanns Seidel Foundation.