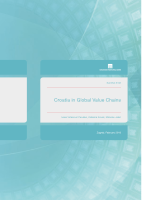 Global value chains have become a powerful source of increased efficiency and firm competitiveness. This paper explores Croatian participation in GVCs. Our results suggest that Croatia’s integration in GVCs did not essentially change from 2000 until 2014. Involvement in GVCs did not change in peer countries either, but they significantly increased their backward and decreased forward participation, while the structure of integration in Croatia stayed almost the same. In addition, the analysis of the structure of value added in exports in manufacturing sector shows that the share of domestic value added in gross exports in 2014 was high in the production of food, beverages and tobacco industry, pharmaceutical products, and computers and electronics. Moreover, the pharmaceutical industry is the only industry that significantly increased the share of domestic value added in exports from 2000 to 2014. Finally, our results indicate that Croatia is strongly integrated in GVC trade only with a few countries, with Germany being its most important GVC partner.