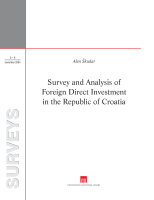 This paper analyses foreign direct investments in the Croatian manufacturing sector and attempts to determine the effects of such investments on host companies, whether they are newly-established or acquired. The assessment of the effects has been carried out on the basis of analysis of movements in their revenues (production/sale), capital, employment and productivity in the 1998-2002 period. The obtained results have been compared with the movements in the identical indicators for other domestic companies in the manufacturing sector. It has been assumed that companies that have received foreign direct investments are superior to other domestic companies, in terms of technology and organisation, due to which they should grow faster. This primarily refers to newly-established companies, whereas somewhat more modest performance is expected in the initial period in companies that have been acquired, due to the required reorganisation and restructuring. The experience in transition countries of Central Europe shows that movements in revenues (production/sale), employment and capital of these companies should form the J-curve - decline, followed by a gradual recovery and reaching of increasingly higher levels relative to the period prior to the acquisition. The results confirm the assumptions to a large extent, in the case of movements in revenues, capital and productivity. Positive effects on employment are yet to be seen. Companies that have received foreign direct investments are mainly more successful than domestic companies. However, foreign direct investments have not so far played as important role in the Republic of Croatia's manufacturing sector, as it is the case in the Central European transition economies.