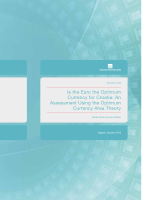 Using the optimum currency area theory, this paper analyses whether Croatia is ready for euro adoption. The theory proposes several criteria a country should meet to be able to function successfully in a setting of common monetary policy. Most of the criteria refer to the establishment of the degree of economic integration between a country and a monetary union in view of the fact that close economic integration implies lower risk of asymmetric shocks. The analysis shows that the Croatian economy is highly integrated with the euro area in terms of trade and finances, its business cycle is synchronised with the business cycles of the major euro area member states, while EU accession raised the degree of political integration between Croatia and other member states. Under these criteria, it may be concluded that Croatia will function efficiently in a setting of common monetary policy. By contrast, Croatia's performance regarding the economic diversification criterion is relatively poor. In addition to favourable results under most criteria of the optimum currency area theory, there are other important arguments in favour of euro adoption in Croatia. More specifically, the adoption of the euro would eliminate the problem of the high euroisation of the Croatian economy, as well as a number of other risks and constraints arising from that problem. By adopting the euro, Croatia would therefore make an important strategic step towards maintaining macroeconomic and financial stability in the long run.