A Note on Kuna Lending 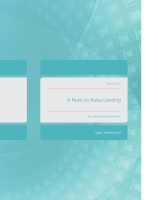 After being on the rise since 2013, lending in domestic currency picked up strongly in 2016. This refers mostly to household loans, though kuna lending to the corporate sector has also intensified in the recent period. The following
factors supported stronger lending in the domestic currency: the increase in kuna sources in the structure of bank liabilities, in particular demand deposits, which, in the environment of falling interest rates, contributed to the drop in interest rates on kuna loans and a reduction of the spread between interest rates on kuna and euro loans; enhanced household demand for kuna loans driven by lower interest rates and the negative experience with Swiss franc-indexed loans (including the refinancing of converted euro loans by kuna loans); expansionary monetary policy measures of the Croatian National Bank (CNB) accompanied by regulatory changes, which prompted the banks to expand the supply of kuna loans and ensured greater awareness of consumers about currency risk; and stronger
competition among banks to grant new loans in the context of still subdued lending activity. The trend of intensified kuna lending has led to a reduction in credit euroisation in banks' balance sheets. The share of kuna loans in total loans went up from 27.5% at end-2012 to 40.3% at end-September 2016 (from 23.7% to 40.3% for the household sector and from 32.3% to 41.2% for the sector of non-financial corporations). The key precondition for the continued trend of credit de-euroisation is certainly deposit de-euroisation, i.e. the change in the currency structure of deposits, which can be supported by, among other factors, the sustained macroeconomic and financial stability in the country, including exchange rate stability, as well as the steady recovery of the Croatian economy based on sound fundamentals and fostered by a reduction of macroeconomic imbalances.