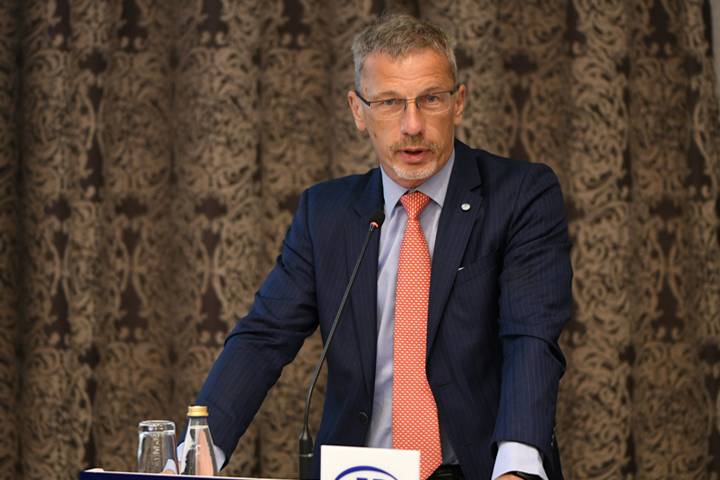 “The project that gathered us here today is one of the many efforts made to bring Montenegro closer to EU accession, and the activities conducted under the project are in line with the recommendations of the European Union. A good example is the new Credit Institutions Law, which, together with several pieces of subordinate legislation, has been aligned with the relevant EU directives and regulations as a result of successful cooperation of central bank experts from Croatia and Montenegro” noted Croatian National Bank Governor, Boris Vujčić, at the closing conference of the Twinning project “Support to Regulation of Financial Services” for the financial sector in Montenegro on 7 July in Podgorica. Looking at the achievements made during the project, Governor Vujčić underlined the importance of ensuring the implementation of financial services in accordance with the best EU practice. He noted that the Croatian government hosted, in the framework of the Croatian presidency of the Council of the EU, in early May this year the EU-Western Balkans summit at which heads of the EU confirmed their support to the European perspective of the Western Balkans.

The purpose of this project was to achieve further legislative alignment in the area of financial services with the acquis communautaire and strengthen regulatory and supervisory capacities of beneficiary institutions. The project covered the entire financial system of Montenegro and for the purposes of the project, a consortium was set up, consisting of central banks of Germany, Croatia and the Netherlands and the financial services supervisory agencies of Germany and Croatia (BaFin and HANFA). The EU-funded project worth EUR 1 410 000 lasted from April 2018 to July 2020 and the beneficiary institutions were the Central Bank of Montenegro, the Capital Market Authority and the Insurance Supervision Agency. Croatian National Bank experts participated in the area of further alignment of the regulatory framework for the banking sector with the acquis communautaire and strengthening of administrative capacities of the Central Bank of Montenegro in financial stability-related activities. It should be noted that Croatian experts, in terms of expert days, executed as much as approximately 60% of project activities. This is also the first Twinning project in which the Republic of Croatia had a so-called Resident Twinning Advisor, an expert working in Podgorica throughout the duration of the project on project activity coordination.

This is the third completed technical cooperation project with participation of CNB experts, financed by the EU. The Twinning Light Project “Strengthening the capacities of the system for fight against counterfeiting of EUR” for the Republic of North Macedonia was led by the German central bank and was completed in June 2019. The Twinning project “Strengthening of the Institutional Capacities of the National Bank of Serbia in the Process of EU Accession” lasted from September 2018 to March 2020 and involved the participation of a consortium of central banks of Germany, Croatia and Romania. The part of the project relating to insurance also included the participation of the Croatian Financial Services Supervisory Agency (HANFA).

In addition to the mentioned projects, the Croatian National Bank is currently participating in another Twinning project as a consortium member and in one more regional programme. The Twinning project for the National Bank of North Macedonia “Strengthening of the Institutional Capacities of the National Bank of the Republic of North Macedonia in the Process of its Accession to the ESCB” lasts from September 2019 to March 2021 and the participating consortium consists of the central banks of Germany and Croatia. This project too has a Resident Twinning Advisor from the Croatian National Bank.

The experts from the Croatian National Bank, together with 20 central banks of the ESCB, led by the German central bank, are also participating in a regional “Programme for Strengthening the Central Bank Capacities in the Western Balkans with a View to the Integration to the ESCB”, which lasts from March 2019 to March 2021.